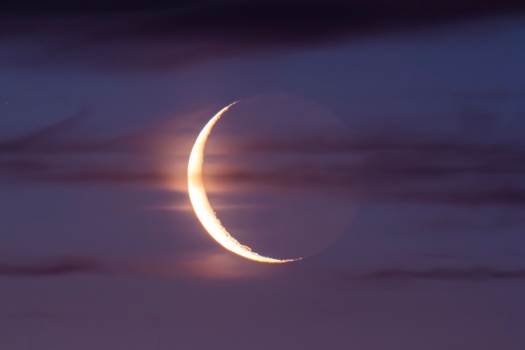 It’s been a season of crescents. A crescent Sun in eclipse. A crescent Venus before and after transit. But this is the more familiar Moon.

I caught the waning crescent Moon rising before the dawn on Saturday, June 16, after an all-night shooting session amid the summer twilight. As dawn was breaking, the Moon rose in the east and drifted through clouds near the horizon.

Here, the glow of Earthshine lighting up the dark night side of the Moon  appears just a little brighter than the twilight sky.

This is an “old Moon,” as at this phase the Moon is three days before new, at age 26 days. At new moon, the Moon is “reborn” and appears anew as a crescent in the evening sky.