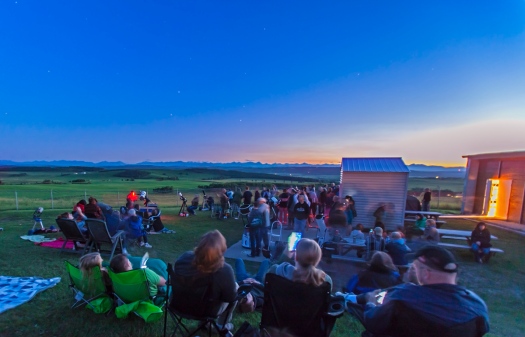 It was an ideal summer night for a public star party. Like it was a summer music festival, people set up lawn chairs and laid out blankets to sit and lie back and watch the show — the sky show.

This was the scene at Saturday’s Milky Way Night, July 21,  at the local university’s Rothney Astrophysical Observatory. Several hundred people attended under ideal clear skies to watch the summer stars appear and revel in the Milky Way away from city lights. Here, people gaze westward after sunset to see the triangular gathering of Saturn, Mars and Spica in the evening twilight. Lots of mobile phones were held skyward as people used their new astronomy apps to identify what they were seeing. These apps are probably the most effective means now for people to get into astronomy. Lots of people were using them this night.