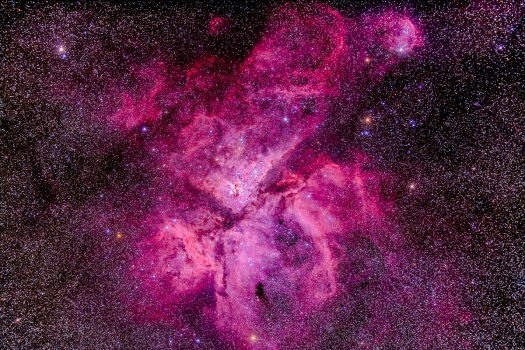 The Carina Nebula ranks as one of the most spectacular sights in the southern sky.

I shot this last night under perfect conditions. I’ve shot this nebula many times before but had to have a go at it again – I think this version is the best yet of many I’ve taken over the years of coming to the southern hemisphere to shoot the sky. I shot this through my 4-inch apo refractor with a filter-modified Canon 5D MkII camera. It’s a stack of five 12-minute exposures at ISO 400.

This massive nebula is the site of loads of star formation, and home to one massive young star, Eta Carinae, that is a prime candidate for a supernova explosion sometime soon. That will certainly stir things up in Carina. This object sits over 6,000 light years away in the next spiral arm in from ours, the Carina-Sagittarius Arm of the Milky Way.

Through the telescope it fills the field with intricate shades of grey — the colours show up only in photos – with one bright yellow star at the centre, Eta Carinae itself shrouded in the golden-hued nebula it cast off during its last explosive outburst in the 1840s.

Like the Large Magellanic Cloud, this is one object worth the trip to southern skies just to see for yourself.

2 Replies to “Southern Spectacular in Carina”