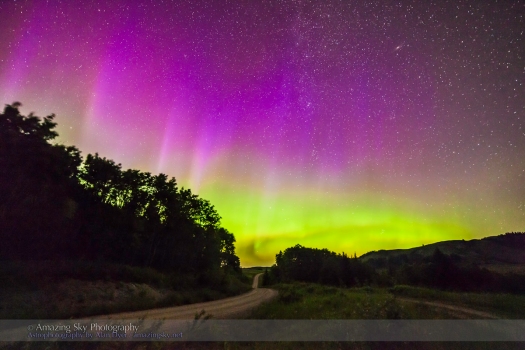 A country road winds off into the dancing Northern Lights.

The sky put on another fine show last night, the fourth in a row with some level of aurora activity. This was the scene Sunday night as a display blossomed for a while, dancing at the end of the back road through the Cypress Hills on the Alberta-Saskatchewan border.

I had one camera shooting north and devoted to the Northern Lights, while, as you can see below, I had two other cameras on rigs to shoot time-lapse movies looking south.

This was the scene at the overlook to the Battle Creek valley, with the Moon setting and me getting the time-lapse gear going, to shoot the Milky Way moving over the hills. One camera was on a mount to pan across the landscape following the stars. The other camera was on a motion control dolly to travel down a track over the 3 hours of the shoot. I spent a lot of time in the car listening to BBC Desert Island Discs and The Life Scientific podcasts last night — the thrill of time-lapse shooting! 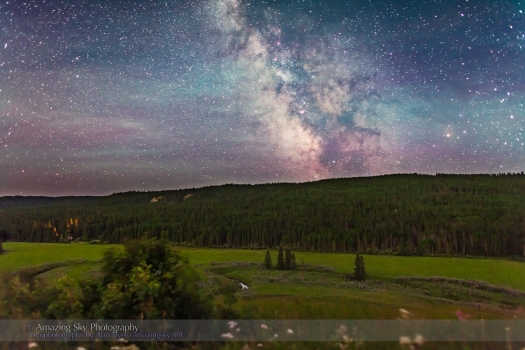 This is one frame from one of the movies. Streaks of green and red airglow tint the sky around the Milky Way. Amazingly, the scene is lit only by starlight and by the aurora. You could never have done this with film. It’s the sensitivity of digital cameras that makes such scenes possible, though it takes some clever processing (such as Shadow Detail recovery in Raw, Shadows and Highlights, & masked Adjustment Layers) to balance Earth and sky in the final image.

2 Replies to “Road to the Northern Lights”