Our tour group to see the Northern Lights finally saw what they traveled north to experience – the aurora borealis dancing across the sky.

This week and next I’m helping to lead some tour groups who have come to Churchill, Manitoba to see the aurora. We’ve been here 3 nights so far but last night was the first with clearing skies and when the Northern Lights appeared above us.

Our home base is the beautiful Churchill Northern Studies Centre, far enough from the main townsite to give us dark skies. Being able to sleep, eat and take in lectures (or for me, give lectures) right where we can see the aurora is a tremendous luxury and convenience. The Centre is perfectly set up for aurora viewing, with a rooftop dome, and the ability to “go dark” with all lights off.

Here in Churchill, on the shores of Hudson Bay, we are at a latitude of 58° north. But critically, we are right under the usual position of the auroral oval, the main band of Northern Lights that circles the world at high latitudes. 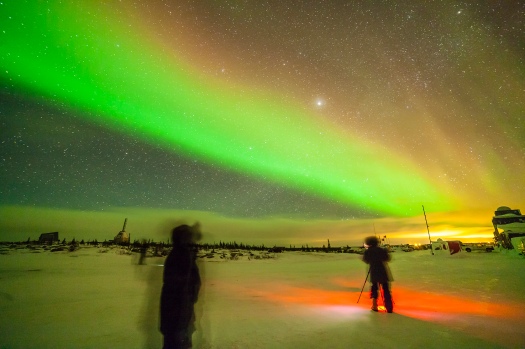 As such, even though last night the various aurora and magnetic field indicators were registering a quiet display with little disturbance in the field, we still saw a beautiful display. It wasn’t very active but did display curtains and rays shooting up to the zenith.

As seen here, for much of the time the main band of aurora was actually in the south. That’s Jupiter glowing through the aurora and thin clouds at upper right.

We’ve been fighting clouds all week but last night skies cleared for long enough and it seemed at just the right time to coincide with the brightest outburst of this display. After I took these images, the aurora died down to a more diffuse glow then the clouds thickened in again. By then it was 3 am and we all retired to our rooms.

One Reply to “Underneath the Northern Lights”