The red eclipsed Moon shines over the Milk River, with Orion over the Sweetgrass Hills.

This was the scene at 4:45 this morning, October 8, from my observing site for the lunar eclipse, Writing-on-Stone Provincial Park in southern Alberta.

The eclipsed red Moon shines at far right over the Milk River and sandstone formations of Writing-on-Stone Park, home to ancient petroglyphs, and a sacred site to First Nations people.

At left are the Sweetgrass Hills across the border in Montana. Above shine the stars of Orion, with his Dog Star Sirius below. Above is Taurus, with Aldebaran and the Pleiades cluster.

The night was fairly clear for the hour of totality, though with high haze fuzzing the stars and Moon. But considering the cloud I had driven 3 hours to escape I was happy. 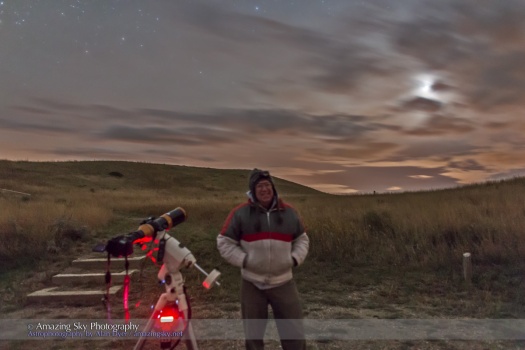 Here I am in a 5:30 a.m. selfie by starlight and moonlight, with the clouds I had escaped now rolling in to cover the Moon as it began to emerge from Earth’s shadow.

No matter. I had captured what I had come for: the nightscape above (with a 14mm lens), and close-ups shot through this telescope gear, one of which I featured in my previous post.

One Reply to “Red Moon over Writing-on-Stone”