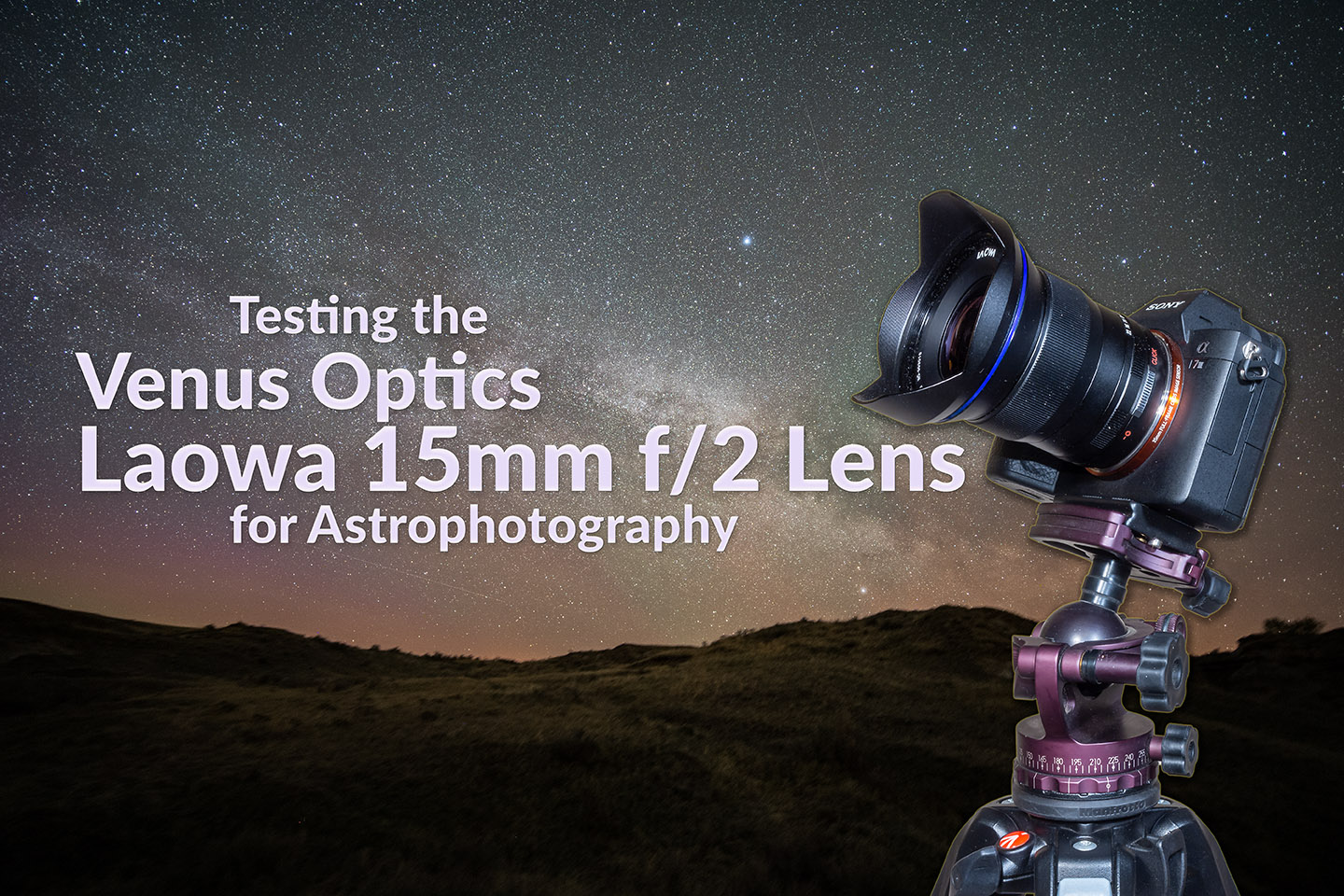 I test out a fast and very wide lens designed specifically for Sony mirrorless cameras.

In a previous test I presented results on how well the Sony a7III mirrorless camera performs for nightscape and deep-sky photography. It works very well indeed.

But what about lenses for the Sony? Here’s one ideal for astrophotography.

Made for Sony e-mount cameras, the Venus Optics 15mm f/2 Laowa provides excellent on- and off-axis performance in a fast and compact lens ideal for nightscape, time-lapse, and wide-field tracked astrophotography with Sony mirrorless cameras. (UPDATE: Venus Optics has announced versions of this lens for Canon R and Nikon Z mount mirrorless cameras.)

I use it a lot and highly recommend it.

While I often use the a7III with my Canon lenses by way of a Metabones adapter, the Sony really comes into its own when matched to a “native” lens made for the Sony e-mount. The selection of fast, wide lenses from Sony itself is limited, with the new Sony 24mm G-Master a popular favourite (I have yet to try it).

However, for much of my nightscape shooting, and certainly for auroras, I prefer lenses even wider than 24mm, and the faster the better.

Aurora over Båtsfjord, Norway. This is a single 0.8-second exposure at f/2 with the 15mm Venus Optics lens and Sony a7III at ISO 1600.

The Laowa 15mm f/2 from Venus Optics fills the bill very nicely, providing excellent speed in a compact lens. While wide, the Laowa is a rectilinear lens providing straight horizons even when aimed up, as shown above. This is not a fish-eye lens.

The Venus Optics 15mm realizes the potential of mirrorless cameras and their short flange distance that allows the design of fast, wide lenses without massive bulk.

While compact, at 600 grams the Laowa 15mm is quite hefty for its size due to its solid metal construction. Nevertheless, it is half the weight of the massive 1250-gram Sigma 14mm f/1.8 Art. The Laowa is not a plastic entry-level lens, nor is it cheap, at $850 from U.S. sources.

For me, the Sony-Laowa combination is my first choice for a lightweight travel camera for overseas aurora trips

However, this is a no-frills manual focus lens. Nor does it even transfer aperture data to the camera, which is a pity. There are no electrical connections between the lens and camera.

However, for nightscape work where all settings are adjusted manually, the Venus Optics 15mm works just fine. The key factor is how good are the optics. I’m happy to report that they are very good indeed.

Testing Under the Stars

To test the Venus Optics lens I shot “same night” images, all tracked, with the Sigma 14mm f/1.8 Art lens, at left, and the Rokinon 14mm SP (labeled as being f/2.4, at right). Both are much larger lenses, made for DSLRs, with bulbous front elements not able to accept filters. But they are both superb lenses. See my test report on these lenses published in 2018.

The next images show blow-ups of the same scene (the nightscape shown in full below, taken at Dinosaur Provincial Park, Alberta), and all taken on a tracker.

I used the Rokinon on the Sony a7III using the Metabones adapter which, unlike some brands of lens adapters, does not compromise the optical quality of the lens by shifting its focal position. But lacking a lens adapter for Nikon-to-Sony at the time of testing, I used the Nikon-mount Sigma lens on a Nikon D750, a DSLR camera with nearly identical sensor specs to the Sony.

Above is a tracked image (so the stars are not trailed, which would make it hard to tell aberrations from trails), taken wide open at f/2. No lens correction has been applied so the vignetting (the darkening of the frame corners) is as the lens provides.

As shown above, when used wide open at f/2 vignetting is significant, but not much more so than with competitive lenses with much larger lenses, as I compare below.

And the vignetting is correctable in processing. Adobe Camera Raw and Lightroom have this lens in their lens profile database. That’s not the case with current versions (as of April 2019) of other raw developers such as DxO PhotoLab, ON1 Photo RAW, and Raw Therapee where vignetting corrections have to be dialled in manually by eye.

When stopped down to f/2.8 the Laowa “flattens” out a lot for vignetting and uniformity of frame illumination. Corner aberrations also improve but are still present. I show those in close-up detail below.

Above, I compare the vignetting of the three lenses, both wide open and when stopped down. Wide open, all the lenses, even the Sigma and Rokinon despite their large front elements, show quite a bit of drop off in illumination at the corners.

The Rokinon SP actually seems to be the worst of the trio, showing some residual vignetting even at f/2.8, while it is reduced significantly in the Laowa and Sigma lenses. Oddly, the Rokinon SP, even though it is labeled as f/2.4, seemed to open to f/2.2, at least as indicated by the aperture metadata.

Above I show lens sharpness on-axis, both wide open and stopped down, to check for spherical and chromatic aberrations with the bright blue star Vega centered. The red box in the Navigator window at top right indicates what portion of the frame I am showing, at 200% magnification in Photoshop.

On-axis, the Venus Optics 15mm shows stars just as sharply as the premium Sigma and Rokinon lenses, with no sign of blurring spherical aberration nor coloured haloes from chromatic aberration.

Focusing is precise and easy to achieve with the Sony on Live View. My unit reaches sharpest focus on stars with the lens set just shy of the middle of the infinity symbol. This  is consistent and allows me to preset focus just by dialing the focus ring, handy for shooting auroras at -35° C, when I prefer to minimize fussing with camera settings, thank you very much!

The Laowa and Sigma lenses show similar levels of off-axis coma and astigmatism, with the Laowa exhibiting slightly more lateral chromatic aberration than the Sigma. Both improve a lot when stopped down one stop, but aberrations are still present though to a lesser degree.

However, I find that the Laowa 15mm performs as well as the Sigma 14mm Art for star quality on- and off-axis. And that’s a high standard to match.

The Rokinon SP is the worst of the trio, showing significant elongation of off-axis star images (they look like lines aimed at the frame centre), likely due to astigmatism. With the 14mm SP, this aberration was still present at f/2.8, and was worse at the upper right corner than at the upper left corner, an indication to me that even the premium Rokinon SP lens exhibits slight lens de-centering, an issue users have often found with other Rokinon lenses.

Image aberrations are very acceptable at f/2, a speed that allows shutter speed and ISO to be kept lower for minimal star trailing and noise while ensuring a well-exposed frame.

Where the Laowa 15mm really shines is for auroras. On my trips to chase the Northern Lights I often take nothing but the Sony-Laowa pair, to keep weight and size down.

Above is an example, taken from a moving ship off the coast of Norway. The fast f/2 speed (I wish it were even faster!) makes it possible to capture the Lights in only 1- or 2-second exposures, albeit at ISO 6400. But the fast shutter speed is needed for minimizing ship movement.

Examples of my aurora videos shot with the Sony and Venus Optics 15mm lens are in previous blogs from Yellowknife, NWT in September 2018, from Churchill, Manitoba in February 2019, and from at sea in Norway in March 2019.

Click through to see the posts and the videos shot with the Venus Optics 15mm.

As an aid to video use, the aperture ring of the Venus Optics 15mm can be “de-clicked” at the flick of a switch, allowing users to smoothly adjust the iris during shooting, avoiding audible clicks and jumps in brightness. That’s a very nice feature indeed.

In all, I can recommend the Venus Optics Laowa 15mm lens as a great match to Sony mirrorless cameras, for nightscape still and video shooting. UPDATE: Versions for Canon R and Nikon Z mount mirrorless cameras will now be available.