This wonderful rainbow lasted only a few minutes, as most do, shining in the brief interval when sunlight and raindrops are at their combined best.

I captured this rainbow off the back deck, on June 2, as a storm receded to the east and the Sun broke through in the west, ideal circumstances for catching a rainbow, at least photographically.

This was a classic bow, showing the inner main bow and the fainter outer secondary bow with colours reversed. The sky is bright inside the the inner bow from scattered light from the raindrops, and darker between the two bows where there is an absence of scattered light, a phenomenon called Alexander’s Dark Band after the ancient Greek astronomer who first described it.

I used a Canon 60Da and 10-22mm lens for this, at 10mm for wide-angle coverage of almost the entire rainbow.

Following up on my previous post, here is the wide-angle scene of that same winter moonrise, taken at sunset on January 8, 2012.

This was a spectacular and truly “amazing sky,” with the last rays of the setting Sun illuminating the clouds and the rising Full Moon coming up in the pinks and blues of twilight. It is the big prairie sky at its best.

The wide scene captures dark cloud shadows converging toward the point opposite the Sun, near where the Full Moon sits. These are “crepuscular rays,” a common sight at sunset or sunrise.

This is a shot I’ve been after for several years, usually from this same location, looking west toward the setting Sun.

This is sunset at the autumnal equinox, with the Sun going down due west, something it does only at the two equinoxes. September’s usually the one with clear skies, as it was this night, Sept 23, 2011. Except for some annoying clouds at the horizon over the Rockies to the west. I was hoping for a clear shot of the Sun right at sunset at the end of Highway 1, the Trans-Canada Highway. But it’s close. Better luck next year!

After today, the Sun will be setting south of west, and the days will become shorter than the nights.

This is a 6-image HDR stack to capture both the bright and dark parts of the scene. It worked, but Photoshop refused to properly remove the “ghosts” — images from cars moving from shot to shot. But if I hadn’t told you about it, you might not have noticed!

This is the kind of sky that makes astronomers smile. Clear and painted with twilight colours.

This was the scene two weekends ago, on August 26, at the annual Starfest star party in southern Ontario. Starfest is Canada’s biggest annual astronomy gathering and this year attracted about 700 people, filling the campground with tents, trailers and telescopes.

I was fortunate enough to be able attend this year, as one of the guest speakers in a pretty full program of afternoon and evening talks. I presented two talks, on the “Great Southern Sky” and on “Ten Tips for Better Pix,” plus presented a laser tour of “my sky” after dark on the Friday.

Starfest, as with other star parties I’ve been to lately, hasn’t fared well for weather in the last few years, but this year the clouds (mostly!) stayed away and people enjoyed a fabulous weekend under the Milky Way and summer stars.

This is a roughly 180° panorama taken at twilight, showing the rising dark blue arc of Earth’s shadow at left, with a strangely bright glow in the atmosphere above it. At right is the glow of sunset and some crepuscular rays (shadows from distant clouds) visible as bright and dark bands across the sky.

Starfest is a great star party. Anyone in eastern Canada interested in astronomy should make a point of attending. Next year’s event is August 16-19, 2012. 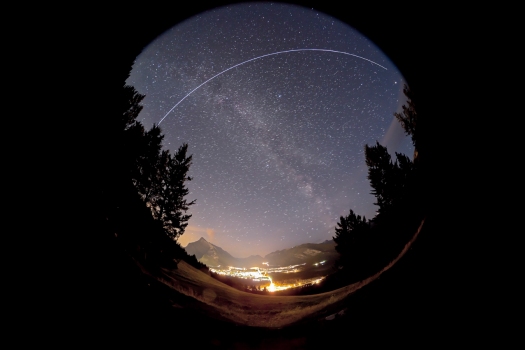 This was the view Friday night, August 19, 2011, as the International Space Station flew over Banff, Alberta and the Canadian Rockies.

I took this shot (actually this is a composite of three successive exposures) from the viewpoint on Mt. Norquay overlooking the Banff townsite and the Trans-Canada Highway interchange, unfortunately all too well lit. This might well be a case study in light pollution as well.

But the lights in the valley don’t diminish the Milky Way above, and the sky-wide streak created by the passage from west to east of the Space Station. What looks like a brilliant star to the eye turns into a streak here due to the three 45-second time exposures I used to capture this scene. The lens is the 8mm fish-eye, and these frames are from a 400-frame time-lapse movie for the planetarium dome.

This is one for the time-lapse geeks!

One of the trickiest subjects for a time-lapse sequence is a smooth and seamless day-to-night transition. Exposure times vary from fractions of a second before sunset to several seconds at night fall.

How to do it? Manually shifting exposures is too much work and prone to error. Putting the camera on Automatic can work but inevitably results in an effect known in the time-lapse world as “flickering.” The camera’s automatically-judged exposures aren’t consistent from frame to frame so the final movie shows minor bright/dark flickering, making it look jerky.

For this test sequence of sunset over the Calgary skyline, I tried a new toy for the first time, as a solution.

The device is called the Little Bramper (for Bulb Ramping). It is a custom-made intervalometer that fires the camera shutter every few seconds (at whatever interval you desire). Nothing new there. But what’s unique is that it can be set to slowly increment the exposure time by as little as 1/1000th of a second from frame to frame, gradually increasing the exposure (“ramping” it) to accommodate the darkening scene. The result is a smooth transition from day to night with no flickering.

This was my first use of the Bramper and it wasn’t without its glitches. The shortest exposure the Bramper can provide (it always controls the camera thru its Bulb setting) is about 1/10th of a second (I had no idea camera shutters can fire as quickly as that even on Bulb).

But at the beginning of a sequence like this, with a bright sky, achieving that exposure (still quite long) means using a small f-stop, a slow ISO speed, or a neutral density filter, or all of the above. But as the sky darkens and exposures lengthen, exposures would become too long to fit within the desired interval between frames (typically no more than 5 to 10 seconds for a smooth sequence). So, to shorten the exposures you then have to open up the lens, switch to a faster ISO, or remove the ND filter, while also commanding the Bramper to quickly reduce its exposure time, all in one exposure cycle (i.e. 5 to 10 seconds) so as not to lose or ruin frames. Takes some coordination and practice (hit the Bramper’s button, adjust the camera, all within 5 seconds), and I didn’t get it right the first couple of times.

But overall, for a first test, the sequence turned out very well. The $80 Little Bramper does the job, though it does take careful monitoring through the sequence, not just to perform the exposure swaps, but to also watch that the ramping rate (adjustable on the fly) matches what the scene is doing and you aren’t under- or over-exposing. It’ll take a little more practice, but the results certainly are worth it.

It’s another neat tool in the time-lapse arsenal.

It’s been quite a while since I’ve seen a display of Northern Lights as good as this one. But with the Sun picking up in activity from a record lull in the last few years, great all-sky displays like this might become more frequent.

The last time I saw aurora cover most of the sky like it did last night (August 5) was back in the days of shooting film. So this was the first chance I had to shoot an all-sky aurora with digital cameras. This is with the Canon 7D and the ultra-wide 10-22mm zoom. I also shot with the fish-eye 8mm, and an “all-sky” movie of those frames will be in the next posting.

This display was widely seen and predicted, as solar monitoring satellites had observed major flares on the Sun earlier in the week and tracked the resulting “coronal mass ejections” across the solar system. We knew they were aimed at Earth and would hit August 5. In this case, the resulting geomagnetic storm raged for long enough that people across a wide swath of longitudes from Europe to North America were able to see the display during their local night, August 5/6. Even people in the northern U.S. had a good look.

While the display was certainly active and extensive it never did get really bright. So this one still falls short of the “10 out 10” scale for spectacle. Nevertheless, as digital cameras can do so well, the images picked up the greens from glowing oxygen with remarkable intensity. More interesting are the purples, seen toward the beginning of the night but then they faded away. The purple tints come from the tops of the towering curtains of aurora which often glow red from nitrogen molecules at very high altitudes being charged up and excited. But the tops of the curtains can also be lit by sunlight. The blue from the sunlight and the red from the aurora itself mix to produce a purple tint. Only the camera picked this up.