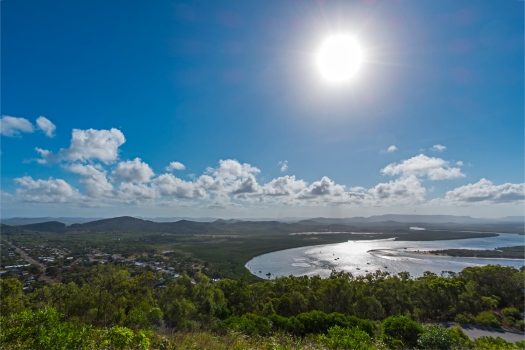 I began my journey to Australia with a visit to the replica of James Cook’s ship Endeavour in Sydney. I’m ending this part of my trip with a visit to where Cook beached the HMB Endeavour for repairs at what is now Cooktown in far north Queensland. This is where Cook spent the most time in Australia, though not by intention.

In 1770 Cook was sailing north along the Queensland coast, after visiting Tahiti the year before to see the transit of Venus. He inadvertently discovered the Great Barrier Reef. Endeavour ran aground on what is now called Endeavour Reef. The crew was able to repair the ship well enough and save themselves by getting Endeavour to this harbour at what is now Cooktown where the Cook River meets the Coral Sea. There, with the ship beached, they were able to effect more permanent repairs to its damaged hull.

The site is just below this viewpoint at an idyllic harbour. They stayed there for two months in July and August 1770, effecting repairs and sighting, among other curiosities, kangaroos for the first time.

I visited Cooktown yesterday as part of a 4WD trek up the Bloomfield Track north of Cape Tribulation and through the Daintree Rain Forest. At Cooktown its museum, converted from an old convent, contains the original main anchor and one of the large canons from Endeavour, recovered from where the crew tossed them overboard to lighten the ship’s load and gain draft to sail off the reef. They are some of the few pieces of Endeavour that still remain.