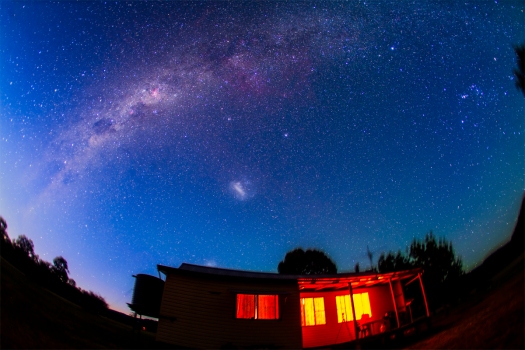 At the end of a nearly perfect night of southern stargazing, I shot this wide-angle portrait of the southern Milky Way embedded in the deep blue of morning twilight.

In December at dawn, the southern Milky Way extends from Orion (at the extreme right) down through Canis Major, Puppis and Vela (where you can see a large faint red bubble-shaped nebula high in the south) then continues east (left) into Carina and Crux. The red Carina Nebula sits in the Milky Way and the Southern Cross is at left, rising before the two Pointer Stars, Alpha and Beta Centauri. The Magellanic Clouds sits above the cottage I’m using as my southern hemisphere home for stargazing while I am in Australia.