The Full Moon rises behind the famous Mitten buttes at Monument Valley.

I spent a fabulous weekend capturing sunsets and nightscapes at the iconic Monument Valley on the Utah/Arizona border, the photogenic outdoor set of dozens movies over the decades.

On the eve of the total lunar eclipse I shot the nearly Full Moon rising behind the West (left) and East (centre) Mittens and Merrick Butte (at right). On the evening of Friday, April 3 the Moon rose and sat amid the sunlit clouds with the Sun still up.

The alignment that would place the Moon directly opposite the Sun to create the eclipse was still 11 hours away.

Note how the butte’s shadows point almost, but not quite directly, at the nearly Full Moon. They point at the place in the sky the Moon would be before dawn at the end of that night.

Indeed, on eclipse morning on Saturday, April 4 the Moon set exactly as the Sun rose (see my photos in my previous blog).

But on eclipse eve the Moon rose 30 minutes before the Sun set, providing a chance to catch the Moon behind the still sunlit red buttes.

I shot this image about 20 minutes after sunset on April 3, so the foreground is now in shadow but the Moon appears in a more richly tinted twilight sky.

Later on April 3 I captured this scene, with the Tear Drop and Rock Door Mesas now lit by a bright Full Moon, and with the stars of the winter sky setting into the west. Canis Major and Orion are at left, while Taurus, including the Pleiades star cluster and brilliant Venus, are at right.

The Orion & Venus image is a 2-panel panorama.

On the evening of April 4, clouds thwarted plans for a long star trail sequence above a moonlit foreground.

Instead, I shot toward the Moon and clouds, to capture subtle moonbeams radiating out from the Moon, now some 14 hours after the eclipse, rising behind Merrick Butte. I shot this from the dusty Loop Road that winds through the valley floor. 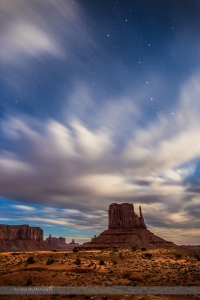 Instead of lots of images for a star trail composite, I was content to shoot this one image, catching the Big Dipper in a brief hole in the drifting clouds, hanging in the sky over the West Mitten butte. The foreground is lit by the partly obscured Full Moon. The long exposure streaks the moving clouds.

Night or day, it’s hard not to take a great photo here, clouds or not!

On my final evening at Monument Valley, high winds common to the area, blowing dust, and the closed Loop Road, scuttled plans again for long star trail sequences from the valley floor.

So on Easter Sunday, April 5, I settled for a panorama from the classic viewpoint showing the setting Sun lighting the buttes and mesas of Monument Valley.

It is an amazing place, but one that still requires patience to wait out the clouds and dust storms.