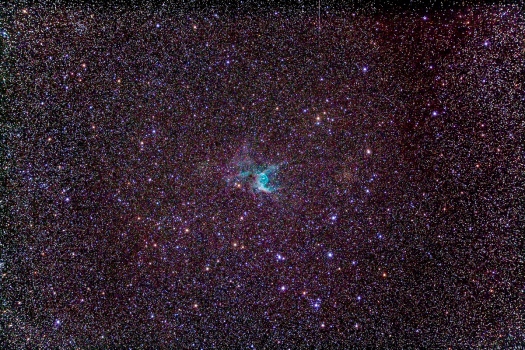 In the third instalment in my trilogy of Canis Major zooms, I present this close-up of another neat nebula in the Great Hunting Dog, called Thor’s Helmet.

You can tell just by the colour that this is a different type of nebula than the typical red hydrogen gas clouds, such as the Seagull Nebula of my previous post. Yes, this is glowing gas but this nebula originates from a different source than most. Rather than being a site where stars form this is a nebula surrounding an aging star, a massive superhot star that is shedding shells of gas in an effort to lose weight – or mass as we should say.

Intense winds from the star blow the gas into bubbles, and cause it to fluoresce in shades of cyan. The central star is one of a rare stellar type called a Wolf-Rayet star, named for the pair of French astronomers who discovered this class of star in the 19th century. WR stars are likely candidates to explode as supernovas.

This particular Wolf-Rayet nebula, catalogued as NGC 2359, has a complex set of intersecting bubbles that, through the eyepiece, do take on the appearance of a Viking helmet with protruding horns, like you see in the Bugs Bunny cartoon operas! It’s a neat object to look at with as big a telescope as you can muster. And, as you can see, it’s rather photogenic as well, embedded in a rich field with faint star cluster companions. 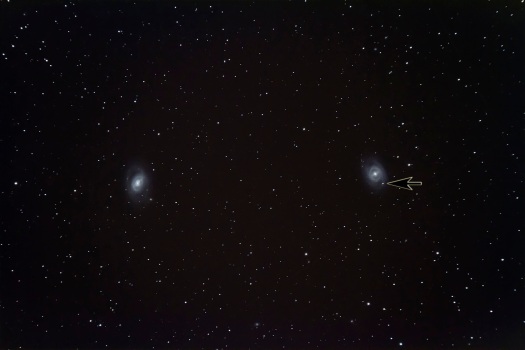 OK, it’s just a dot. But that dot is a massive star ending its life in a titanic supernova explosion.

Unlike all the other stars in this picture, which are close by in the foreground of our own Milky Way Galaxy, that one star indicated is 38 million light years away. It lies in another galaxy altogether, in the outer spiral arm of the galaxy M95. Discovered on March 16, Supernova SN 2012aw is now shining with the light of a hundred million suns as it blasts most of its starstuff into space.

It is these types of stellar explosions that seed the universe with the elements heavier than lead.

I took this shot Monday, April 9 through my 5-inch refractor, an instrument not ideally suited for shooting small objects like galaxies. But its wider field here does take in not just M95 but also its companion in space, the spiral M96 at left. Both are barred spiral galaxies in Leo, on the list of targets compiled by Charles Messier in the late 18th century and favourites of backyard astronomers. It’s rare to get a supernova as bright as this (anyone with a modest telescope can see it) letting off in a well-known “top 100” galaxy like M95.

Take a look on the next clear night, and contemplate the cosmic forces at work to make visible a single star across a gulf of 38 million light years.