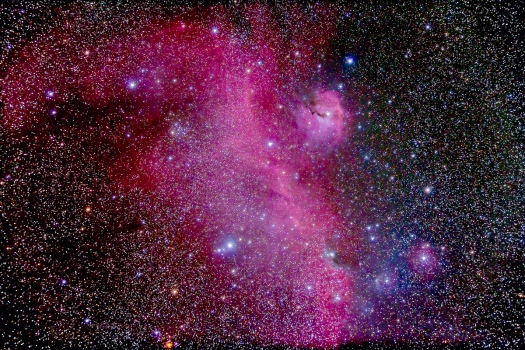 Zooming in closer yet again to the field in Canis Major I showed in my previous post, I’m now framing the large nebula known as the Seagull. Perhaps you can see him flying through the stars.

The catalog number for this object is IC 2177, but the bright round nebula at right (the head of the Seagull?) is object #1 in the catalog of Australian astronomer Colin Gum. It’s also object #2327 in the familiar NGC listing that all stargazers use.

Some of this nebulosity is just visible through a small telescope, especially with the aid of a nebula filter than accentuates the emission lines – the colours – emitted by these kinds of glowing gas clouds.

This is certainly a photogenic field, with a nice mix of pinks, blues, purples and deep reds.

I used my 4-inch (105mm aperture) f/5.8 apo refractor to shoot this target, so the field is fairly narrow, framing what a telescope would show at very low power.

(FYI – The image info listed at left, automatically picked off the image’s EXIF data by the WordPress blog software, fails to record the focal length of the optics properly, as I didn’t use a standard camera lens but a telescope the camera doesn’t know about.)

I’ve been after a good shot of this object for some years, but haven’t been successful until this past observing run in Australia, in December 2012. While I can see and shoot the Seagull Nebula from home in Alberta, it’s always very low in my home sky. From Australia the challenge was framing the field with the Seagull overhead at the zenith. Just looking through the camera aimed straight up took some ground grovelling effort. Plus avoiding having the telescope hit the tripod as it tracked the object over the hour or so worth of exposures – typically 4 to 5 that I then stack to reduce noise.

One Reply to “Zooming into Canis Major – #2”