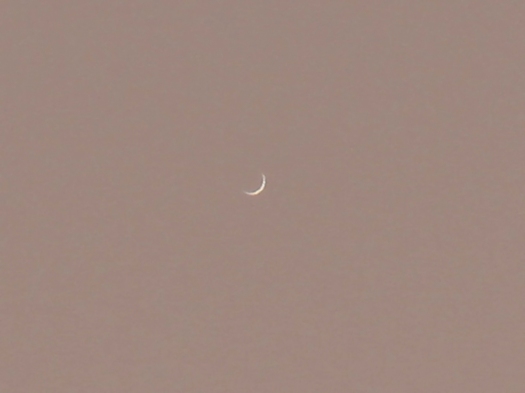 Here’s a last look at Venus before its historic transit across the face of the Sun on June 5.

I took this Monday evening, May 28, with the Sun still up and Venus about 13 degrees east of the Sun but low in my evening sky. Venus appears as a razor-thin crescent, like a tiny “new Moon.” Most of the daylight side of Venus now faces away from us; on the side of Venus turned toward us now all but a sliver of a crescent is dark — we’re looking at the night side of Venus. On June 5, all we will see is this dark side of Venus, appearing in silhouette in front of the Sun’s brilliant disk as Venus moves across the Sun in a transit not to be repeated for another 105 years.

This is a single still-frame grab from a movie shot I shot with the Canon 60Da camera, set in Movie Crop Mode, for a movie 640 x 480 pixels wide. This mode magnified Venus considerably on the frame. I shot this through a small 80mm apo refractor at its f/6 prime focus, so with only 480mm of focal length. But Venus is now so large it doesn’t take a lot of extra magnification to show its disk and phase.

The view through the eyepiece was stunning. The rippling image and sparkling colours, though from distortion in our atmosphere, added to the beauty of Venus, fitting for the goddess of love.