Sunlight and shadows at Fajada Butte served to mark the seasons a thousand years ago.

In the distance is Fajada Butte at Chaco Canyon, New Mexico. It is one of the most famous sites in archaeoastronomy. A thousand years ago, people of the Chaco Culture used it to observe the Sun. 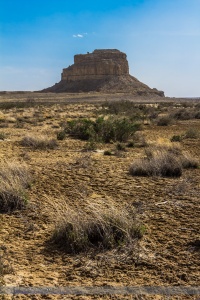 At a site now off limits to preserve its integrity, a set of three rocks cast shadows and daggers of sunlight onto a carved spiral petroglyph.

People used the position of the projected beams of light as a calendar to mark time through the year. In truth, simply watching the changing position of the rising and setting Sun along the horizon, which was also done here at Chaco Canyon, would have worked just as well.

I visited the site today, as part of a trek north through New Mexico, Arizona and into Utah. Chaco Canyon is one of the preeminent sites for archaeoastronomy, demonstrating how well people a thousand years ago (the site was occupied from the mid 800s to the mid 1100s) observed the sky.

For example, a half-day hike takes you to a famous pictograph on a rock face showing a bright star near the crescent Moon, a drawing some have interpreted as being an observation of the supernova of 1054 AD.

In its height, thousands of people lived in the pueblos at Chaco Canyon and surrounding area. This is the Great Kiva at the Chetro Ketl pueblo. Wood columns used to hold a wood roof over this structure to make a space for ceremony and ritual. 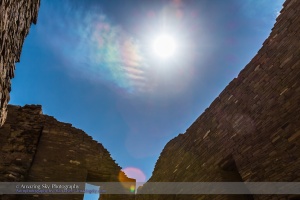 I did a little solar observing myself while there. While walking through the maze of rooms at Pueblo Bonito I looked up to see iridescent clouds near the Sun, created by diffraction of sunlight from fine ice crystals.

In keeping with the site’s astronomical heritage, the Visitor Centre at the Chaco Culture Historical Park has a well-equipped observatory with several top-class telescopes (a 25-inch Obsession Dobsonian among them) and an outdoor theatre for regular stargazing sessions each weekend. This is a world-class Dark Sky Preserve and a World Heritage Site.