Look west and south this weekend to see the two brightest planets each pairing with a bright cluster of stars.

This weekend, Venus and Jupiter each pair with a prominent open star cluster.

In the west, look for brilliant Venus, an evening “star” this spring, shining near the Pleiades, or Seven Sisters star cluster. Some know it as Messier 45.

Both Venus and the Pleiades are in Taurus the bull, whose main stars lie to the left of the Venus-Pleiades pairing. Farther to the left still, look for the distinctive stars of Orion the hunter, whose trio of Belt stars give him away. 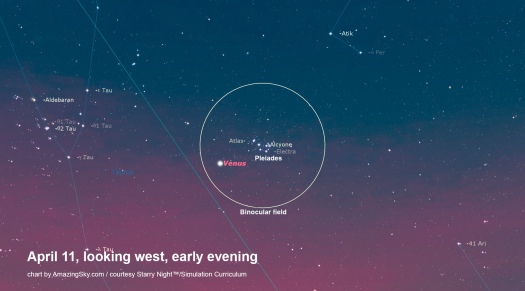 As this close up shows, binoculars will nicely frame Venus and the Pleiades at once.

Venus continues to climb higher this spring while the Pleiades and the other stars of the winter sky, including Orion and Taurus, sink lower and lower. The next few nights are the best for catching Venus as it passes the Pleiades.

High in the south as it gets dark shines the other bright planet in our sky – Jupiter.

It, too pairs with a star cluster. Jupiter now shines a binocular field to the east (left) of the Beehive Cluster, also known as Messier 44. Jupiter and M44 lie in Cancer the crab, a faint constellation nestled between Leo to the east and Gemini to the west.

Jupiter has been retrograding closer to the Beehive all winter and early spring. But this weekend Jupiter sits as close to the cluster as it is going to get. For the rest of spring and summer Jupiter will move east away from the Beehive.

Look west and south as it gets dark this weekend, for the pair of planet-cluster pairings!