A bright display of noctilucent clouds last night prompts me to remind northerners to look north at this prime season for night shining clouds.

Noctilucent clouds (NLCs) can be seen only in summer and are best in the few weeks before and after (mostly after) summer solstice. I shot all these images in the middle of the night. Indeed, the two images above and just below are from 3 am on the morning of June 27.

NLCs are high altitude clouds at the edge of space some 80 kilometres above the Earth, far above any normal weather clouds. Their height allows sunlight streaming over the pole to illuminate them all night long.

Their cause is a mystery. They may form by water vapour condensing on meteoric dust particles.

They look luminescent, as if glowing on their own. But these are not auroras. They shine only by reflected sunlight.

And they have complex structures, with intricate waves and ripples.

And they move very slowly, as this time-lapse from June 17 shows.

Readers living at a latitude between 45° and 55° are best situated to see “NLCs.” From farther south the clouds will be below the horizon. From farther north the sky may be too bright with twilight and the angle of illumination wrong for optimum viewing.

Unlike auroras, there is no predicting when they might appear. Some nights when it is clear where you are, no NLCs appear. Perhaps that’s because of cloud much farther north blocking the path of light from the Sun on the other side of the planet to the clouds on our side of the Earth.

But by the end of July NLC season is coming to an end as the Sun drops farther below the northern horizon at night, and the nights get darker.

So over the next four weeks, look low in the north for night shining clouds. 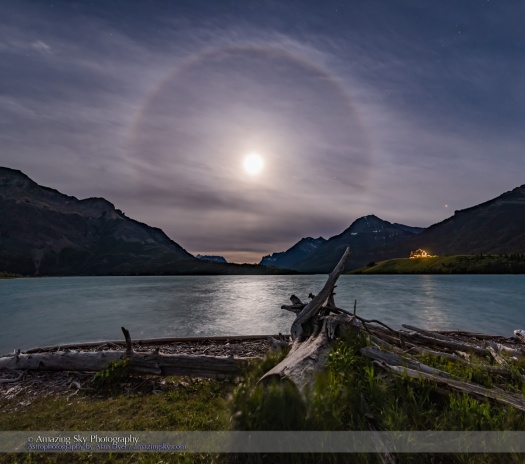 On the night before the solstice Full Moon, the sky added a coloured halo around the Moon.

On June 19 I was at Waterton Lakes National Park, Alberta to teach a workshop on night photography, as one of the programs of the Park’s annual Wildflower Festival. The night proved hazy, but that added the attraction of an ice crystal halo around the Moon.

The lead image above is from Driftwood Beach, looking south across Middle Waterton Lake. Note Mars shining above the mountains at right.

Earlier in the night, at Red Rock Canyon, we watched the Moon rise in the twilight, then climb up the side of Mt. Blakiston. Here (below) it shines above the summit, surrounded by its hazy halo.

The workshop participants made the best of the night, shooting the moonlit scene down the canyon, toward the north and Cassiopeia.

And as here, shooting from the canyon footbridge, toward the very photogenic Anderson Peak, with Jupiter just above the peak.

In keeping with the wildflower theme, I shot wild roses, Alberta’s provincial flower, in the moonlight, with Anderson Peak and stars in the distance. 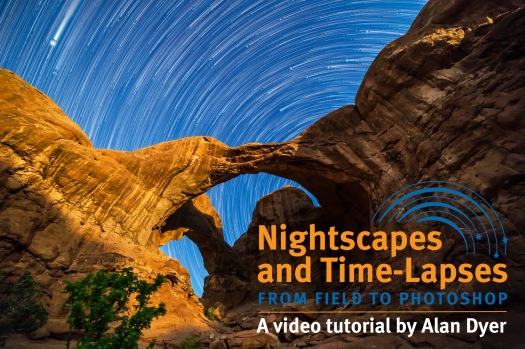 Our video tutorial project is now live on Kickstarter!

For the last two years I’ve been involved in a project to produce a set of comprehensive video tutorials on how to shoot and process Nightscapes and Time-Lapses, to complement my ebook by the same name.

If you’ve not been able to attend my workshops – or even if you have! – these videos will provide you with all the information, and more, in a format you can review over and over.

We’ve shot all the field and studio footage, but to complete the production, we need your help. Back us on Kickstarter and we’ll be able to make the programs available this September, as downloads and on a shipped USB drive.

Our Kickstarter page has all the details. Early backers can purchase the tutorial programs now for as little as $55 – and that’s Canadian! – vs. $80 for the final retail price. The final programs will provide several hours of instruction, both in the field and at the computer.

If you have not participated in a Kickstarter campaign before, it is no risk. Nothing is charged to your credit card until and when the project is successfully funded after the 30-day campaign. If it isn’t successful, you are charged nothing.

We have 30 days to make our goal. We invite you to join us in making our project a reality.

The nights were short and never fully dark, but early June provided a run of clear nights in the Rockies to enjoy Mars and the Milky Way.

Weather prospects looked good for a run of five nights last week so I took advantage of the opportunity to shoot nightscapes from Banff and, as shown here, in Yoho National Park across the Continental Divide in B.C.

The lead image above is a sweeping panorama at Emerald Lake, one of the jewels of the Rockies. Though taken at 1:30 a.m., the sky still isn’t dark, but has a glow to the north that lasts all night near summer solstice. Even so, the sky was dark enough to reveal the Milky Way arching across the sky.

The mountain at centre is Mt. Burgess, home of the famous Burgess Shale Fossils, an incredible collection of fossilized creatures from the Cambrian explosion.

The image is a panoramic stitch of 24 segments but cropped in quite a bit from the original, and all shot with an iPano motorized panning unit. Each exposure was 30 seconds at f/2.2 with the Sigma 24mm lens and Nikon D750 at ISO 4000. One short exposure of the lodge was blended in to reduce its light glare. The original, stitched with PTGui software, is 15,000 x 9,000 pixels.

The view above, a single frame image, shows the view to the south as the Milky Way and galactic centre descend toward the horizon over the south end of the lake. Lights from the Lodge illuminate the trees.

The next night (above) I was at the same spot to shoot Mars in the deepening twilight, and reflected in the calm waters of Emerald Lake, with Cathedral Peak at left.

Another multi-frame panorama, this time sweeping up from the horizon, captures Cassiopeia (the “W”) and the rising autumn constellations reflected in the lake waters.

Vega is at top, Deneb below it, while the stars of Perseus and Pegasus are just rising.

It was a magical two nights in Yoho, a name that means “wonderful!” Both by day and by night.