It was a night to remember, when the sky exploded with a jaw-dropping display of Northern Lights.

Warnings went out around the world and the aurora meters were hitting high numbers. By sunset we were charged up with high expectations of seeing the aurora in high gear dancing in the twilight. We were not disappointed.

From our location at the Churchill Northern Studies Centre near Churchill, Manitoba (latitude 58° North), we see aurora almost every clear night, even when indicators are low.

But this night, the Index was reading 7 on the scale of 0 to 9. I was afraid, after all the effort to come north to see the Lights, the Lights would abandon us and head south. Not so!

The night did start with the Lights in the south, as shown in the panorama image at top. It takes in a full 360°, with the aurora arcing from east to west across the southern sky in Orion. The north over the Centre is clear.

But the curtains soon moved back north and engulfed most of our sky for most of the rest of the night.

Participants in our aurora tour group took their aurora “selfies,” and just looked up in awe at one of nature’s great sky shows. When the last of the group turned in at 2:30 a.m. the Lights were still going.

What follows is a selection — just a few! — of the still shots I took. I also shot time-lapse sequences and real-time videos. All those will take more editing to turn them into a music video, still to come. 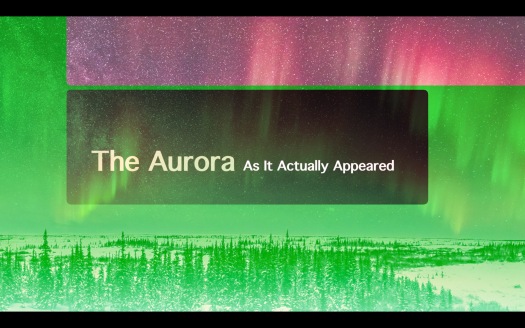 My 10-minute video captures the Northern Lights in real-time video – no time-lapses here!

I hadn’t tried this before but the display of February 12, 2016 from Churchill, Manitoba was so active it was worth trying to shoot it with actual video, not time-lapse still frames.

I used very high ISO speeds resulting in very noisy frames. But I think the motion and colours of the curtains as they ripple and swirl more than overpower the technical limitations. And there’s live commentary!

Select HD and Enter Full Screen for the best quality.

Scenes have been edited for length, and I did not use all the scenes I shot in the final edit. So the scenes you see in the 10-minute video actually took place over about 20 minutes. But each scene is real-time. They show the incredibly rapid motion and fine structure in the auroral curtains, detail blurred in long multi-second exposures.

I used a Nikon D750 camera at ISO speeds from 12,800 to 51,200. While it is certainly very capable of shooting low-light video, the D750 is not optimized for it. A Sony a7s, with its larger pixels and lower noise, would have been a better camera. Next time!

The lens, however, was key. I used the new Sigma 20mm Art lens which, at f/1.4, is the fastest lens in its focal length class. And optical quality, even wide open, is superb.

The temperature was about -30 degrees C, with a windchill factor of about -45 C. It was cold! But no one in the aurora tour group of 22 people I was instructing was complaining. Everyone was outside, bundled up, and enjoying the show.

It was what they had traveled north to see, to fulfill a life-long desire to stand under the Northern Lights. Everyone could well and truly check seeing the aurora off their personal bucket lists this night.

For more information about aurora and other northern eco-tourism tours offered by the Churchill Northern Studies Centre, see churchillscience.ca