The waning crescent Moon shines with sunlight and Earthlight in the morning sky.

This was the Moon before dawn this morning, March 16, 2015. It’s the waning crescent Moon four days before the New Moon of March 20, when the Moon will eclipse the Sun.

To record details in both the bright and dark sides of the Moon I shot six exposures, from 1/160th second to 6 seconds, combining them in a high-dynamic range stack with Photoshop and Adobe Camera Raw for the tone-mapping.

I shot it through my 92mm refractor, shown here in a beauty shot from the evening before. 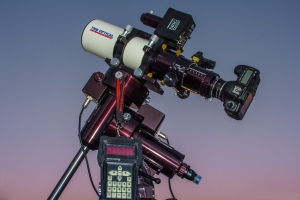 The upcoming solar eclipse by the Moon is visible as a partial eclipse from much of northern Europe (but not from North America, except from a teenie bit of Newfoundland), and as a total eclipse from a path running up the North Atlantic.

The only landfall for the total eclipse path are the Faroe Islands and the Arctic island of Svalbard.

For more details about the eclipse see The Great American Eclipse.

Clear skies to all my eclipse chasing friends, on land, on the sea, and in the air on Friday morning. 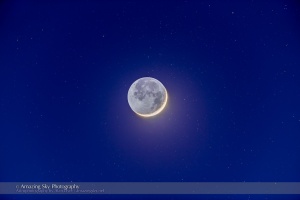 The waxing crescent Moon shines amid the stars and deep blue twilight.

This was the scene last night, as the two-day-old Moon reappeared in the evening sky as a thin crescent.

The Moon looks full because most of the side facing us was brilliantly lit by Earthshine, sunlight reflected off the Earth and lighting the Moon. Here, only the thin crescent at right is directly lit by the Sun.

This was a particularly bright example of Earthshine, likely because so much of the northern part of the Earth is now covered with cloud and snow, making Earth even more reflective than it usually is.

To capture this scene through a telescope, I shot a set of high-dynamic-range exposures, from long to short, to capture the huge range in brightness from the dayside to the darkside of the Moon. The long exposure also captured the stars in the deep blue twilight of a clear New Mexico sky. 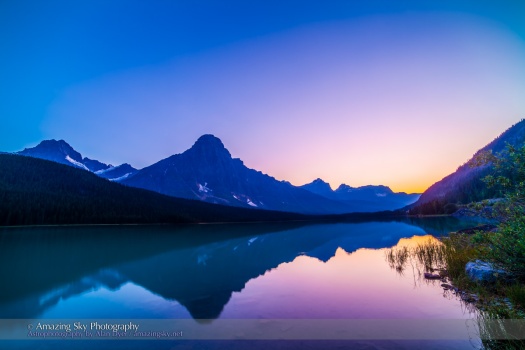 Peaks of the Continental Divide reflect in the calm waters of Lower Waterfowl Lake.

These images provide a sense of what a beautiful night this was, last Monday on the Icefields Parkway in Banff.

The evening started with a super-clear twilight providing subtle shadings – from the last glow of sunset on the horizon, through the “twilight purple” above, to the deep blue of the darkening sky at top.

The purple hue comes from red sunlight still illuminating the upper atmosphere and blending with the blue sky from the usual scattering of short blue wavelengths.

The twilight scene is a high-dynamic range blend of several exposures processed with Photoshop’s HDR Pro as a 32-bit file in Adobe Camera Raw. 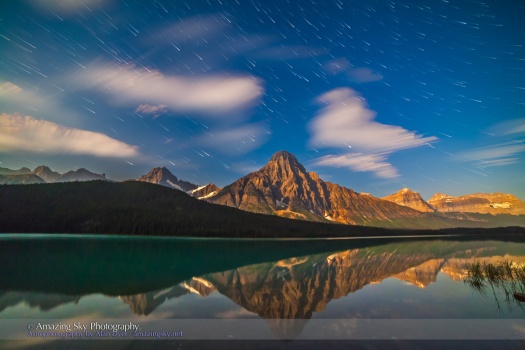 Taking different frames from the same set that I used to capture the Space Station I created this star trail scene, of the western stars setting over Mt. Cephren. Light from the one-day-past Full Moon illuminated the peaks that line the Continental Divide.

The star trail scene is a composite – of many images stacked to create the star trails, blended with a masked single image from the set to supply the landscape.

For the star trail stacking I used the excellent Advanced Stacker Plus actions from Star Circle Academy. To separate and mask out the sky from the landscape image I used Photoshop’s Quick Selection tool and its wonderful Refine Mask function.

I joined a small crowd of moon watchers at the Mt. Norquay viewpoint last night, Sunday, August 10, to view the rising of the super moon, the closest Full Moon of 2014.

Of course, no one could possibly detect that this moon was any bigger or brighter than any other moon. Nevertheless, everyone saw an impressive sight and went away happy.

Yes, I have cranked up the HDR effect a little, to beyond “natural.” But I think the result looks striking and brings out the structure in the clouds that hid the Moon at first.

Think what you will of “super moons,” they get people outside, looking up and marvelling. In this case, the PR prompted a moonwatch party on a fine summer Sunday evening in one of the most scenic places on the planet.

What a spectacular sunset tonight. The Sun is just going down in a blaze of red, while the waxing Moon shines in the deep blue twilight.

I grabbed the camera fast when I saw this happening out my front window, and raced out to the ripening wheat field across the road.

The top image is a 360° panorama of the sky, with the Sun at right and the Moon left of centre. The zenith is along the top of the image.

I used a 14mm lens in portrait mode to cover the scene from below the horizon to the zenith, taking 7 segments to sweep around the scene.

You can see the darkening of the sky at centre, 90° away from the Sun, due to natural polarization of the skylight.

I shot this sunset image a little earlier, when the Sun was higher but still deep red in the smoky haze that has marked the sky of late. It certainly gives the scene a divine appearance!

This is a 5-exposure high-dynamic-range composite to capture the tonal range from bright sky to darker ground, the wheat field. I increased the contrast to bring out the cloud shadows – crepuscular rays.

I boosted colour vibrancy but didn’t alter the actual colours – it was a superb sky.

I used PTGui v10 to stitch the panorama at top and Photomatix Pro to stack and tone the HDR set. While Photoshop is wonderful it did not work for assembling either of these images. 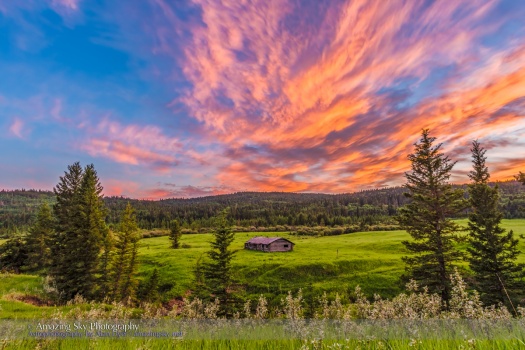 The clouds paint the sky at sunset over a pioneer cabin in the Cypress Hills.

This is a scene the original resident of this cabin would have enjoyed – and painted.

This lonely log cabin in the Battle Creek valley was built by Robert David Symons, renowned as a rancher, naturalist, game warden, and painter, in the style of western artists such as Charlie Russell.

The cabin looks like it dates from the pioneer days of the first European settlement of the area, in the late 19th century. But Symons settled here and built this log cabin in 1939, during the time he worked as a game warden in the Hills, posted at the Battle Creek Ranger Station. He lived in the cabin for only three years before selling it to Albert and Sylvia Noble in 1942.

The Nobles expanded the cabin to accommodate their family. They lived here for 10 years, working a sawmill in the area.

Today the cabin is a scenic stop on the rough and often muddy Battle Creek Road that winds from the Alberta to the Saskatchewan side of Cypress Hills Interprovincial Park. Travelling it is like being back in the 1940s, when roads were no better than improved cart tracks.

I spent an evening here two nights ago on a perfect summer night, shooting the sunset and then the cabin scene by moonlight using time-lapse cameras and gear.

The main scene at top is a high dynamic range stack of 6 images to preserve details in the bright sky and dark foreground.

The self-portrait is a single shot taken by moonlight. Mars and Spica are just setting as a pair of stars over the hills across the valley.

It was a magical night in the Hills.

The sky lights up pink to match the wild roses in Cypress Hills.

Last night the twilight sky over the Cypress Hills was simply stunning. The clouds contrasted with the blues and pinks of twilight. On the way out to an evening shoot I stopped to take this image of the darkening sky colours behind the blooming wild roses, the floral emblem of Alberta.

In this photograph I’m looking east, opposite the sunset. The dark blue on the horizon is the shadow of the Earth rising. Above the shadow is a fringe of pink, the Belt of Venus, from red sunlight still lighting the upper atmosphere in that direction. Its colour nicely matches the pink roses – Earth and sky in colour coordination.

This is a high dynamic range stack of 6 exposures, to capture the bright sky and darker foreground in one image, to render the scene as the eye saw it but the camera could not, at least not with a single exposure.

The setting Sun provided a fine light show on the open range of the Canadian Prairies.

This was the scene Friday evening, July 4, as the Sun lit up the clouds in the big sky of the Historic Reesor Ranch.

I’m here for a week of intensive shooting and writing. On the first night the setting Sun put on a fine show, captured in still images, like the high dynamic range composite above, and in time-lapses captured with the motion control gear below.

When I took these shots I was likely right on the 105th meridian, the line of longitude that marks the boundary of Alberta and Saskatchewan. Either way, the land is expansive and stunning.

Just to the south the land rises to the Cypress Hills and the namesake provincial park where I’m spending most nights shooting stills and time-lapses. More to come this week I’m sure! 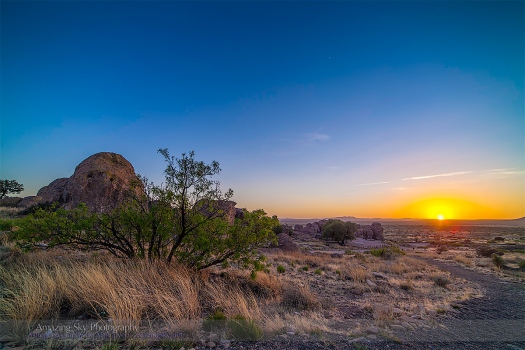 The Sun sets behind the desert landscape of the City of Rocks State Park, New Mexico.

This is another shot from two nights ago, May 2, taken during my evening shoot at New Mexico’s City of Rocks State Park. I took this right at sunset, and you might be able to see the tiny crescent Moon in the twilight sky.

I used an ultra-wide 14mm lens and took a set of 7 exposures taken at 2/3rds stop intervals to capture the full range of brightness from brilliant Sun to shadowy landscape.

I stacked the exposures using Photoshop’s HDR Pro module and then “tone-mapped” the huge range of tonal values using Adobe Camera Raw in its 32 bit mode. This is an excellent way to process “HDR” images, compressing the huge range in brightness into one displayable image. I’ve used several HDR programs in the past but the new method of being able to use ACR, made available in recent updates to Photoshop CC, produces superb natural-looking results. I highly recommended it. 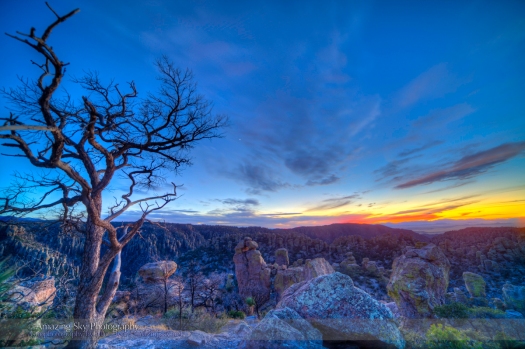 The colours of twilight illuminate the eroded rock formations of Chiricahua National Monument in southeast Arizona.

This was the scene tonight, Tuesday, December 3, as night fell over the Chiricahua Mountains in Arizona. The landscape below is a maze of eroded towers of ancient volcanic ash. The sky above is one of the finest on the continent for stargazing.

I spent a week or so here back in May 1995, stargazing with friends from the parking lot at Massai Point at the summit of the Chiricahuas. Tonight was my first visit back to that parking lot in 18 years. The evening was just as windy as I remember it in 1995. And as it was back then, Venus was in the western sky tonight.

This was sunset a few minutes earlier when the clouds were lit red by the setting Sun. I used a 24mm lens for this shot but a 14mm lens for the main image above.

Both shots are 7- to 8-frame “high dynamic range” composites that stack images taken in quick succession over a range of exposures from 2 stops under to 2 stops overexposed. The stack of images, when merged with HDR software, captures what one exposure cannot, due to the huge contrast between the bright sky and the dark foreground at twilight. I used Photomatix Pro software to do the merging and tonal balancing. Such amazing digital tools were unheard of and undreamed of in 1995!