A couple of Perseid meteors streak across the moonlit sky above Mt. Cephren in Banff National Park.

The night before the peak of the annual Perseid meteor shower was very clear for the first couple of hours. On Monday, August 11, I positioned myself at the shore of Lower Waterfowl Lake, at a roadside viewpoint on the Icefields Parkway in Banff National Park, Alberta.

I had two cameras going, one on a fixed tripod aimed west in hope of catching some meteors in a few frames. Two did, and the main image is a composite of those two frames, as the Perseids shoot over the pyramid peak of Mt. Cephren. 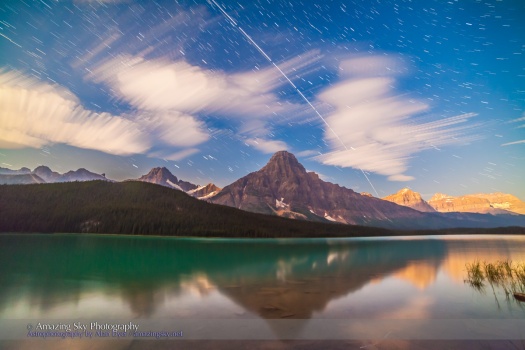 Later, the Space Station also flew over, accompanied by the European ATV cargo ship, captured here in a stack of 18 frames from the 555-frame time-lapse, showing their pass from west to east (bottom to top) of the composite image. The gaps are from when the shutter was closed for 1 second between the 15-second-long exposures with the 14mm ultra-wide lens.

In all, it was a warm and beautiful night, with the normally busy viewpoint all to myself all night, under the light of the nearly Full Moon.

The mountains by moonlight are truly magical.

2 Replies to “Meteors and Space Stations over Mt. Cephren”