The waning Moon joined Venus and Saturn on a cold winter dawn.

This was the scene this morning, January 6, as the waning crescent Moon met with Venus (bright, at centre) and Saturn (below and left of Venus) in the cold morning twilight.

The grouping appeared above the stars of Scorpius. Antares is just above the treetops.

The top image is with the Canon 60Da and 50mm lens.

The view below, with the 135mm telephoto and Canon 6D camera, is from a half hour earlier before the sky began to brighten with morning twilight.

Venus passes very close to Saturn this weekend, with the two worlds appearing within a telescope field on the mornings of January 8 and 9. Get up early before sunrise and look southeast. Binoculars will provide a superb view.

Venus is hard to miss, but is now dropping lower each morning and will soon be gone from view as it ends its wonderful appearance as a morning star.

This morning, October 20, I was able to capture four planets in the morning sky, arrayed along the ecliptic.

I’ve added in the labels and the line of the ecliptic, rising steeply out of the east in the autumn dawn sky.

Of course, there is a fifth unlabelled planet in the scene, quite close in the foreground.

The image below is an unlabeled version. 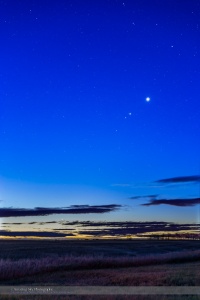 Mercury will be disappearing from view very quickly now as it drops back down toward the Sun.

But over the next week the three higher planets will converge into a tight triangle just 4.5 degrees apart. We won’t see these three planets this close together in a darkened sky until November 2111.

TECHNICAL:
I shot the scene from home in southern Alberta. The image is a composite stack, with manually created masks (not an HDR stack), of 5 exposures, from 15 seconds to 1 second, to contain the range of brightness from the bright horizon to the dimmer star-filled sky higher up. All are with the 35mm lens and Canon 6D at ISO 800. 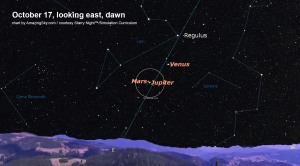 Watch a trio of planets converge in the dawn sky.

You might have already seen Venus shining brightly in the morning sky. And perhaps you’ve seen a slightly less bright object below it. That’s Jupiter.

But there’s a third, even dimmer planet accompanying Venus and Jupiter — reddish Mars. On the morning of Saturday, October 17 (chart above ⬆️) Mars and Jupiter pass just 1/2 degree apart, for a mismatched double “star” at dawn.

The planets put on an even better show in the following 10 days as all three converge to form a tight triangle of worlds in the morning sky.

On October 23 ⬆️, Venus, Mars and Jupiter appear in a close grouping just 4.5 degrees apart, close enough to each other to be easily contained in the field of typical binoculars, the circle shown in these charts. 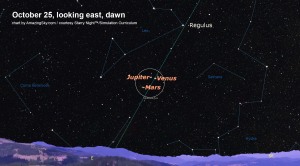 Two mornings later, on October 25 ⬆️, Venus and Jupiter are at their closest apparent separation, just 1 degree apart, for a brilliant double “star” in the morning twilight. If you miss this morning, on the next morning, October 24, the two planets appear about the same distance apart as well.

By October 28 ⬆️, the three planets have switched positions, as Venus drops lower but Jupiter climbs higher. But they again appear in a triangle, 4.5 degrees wide.

The motion you’re seeing from day to day is due to a combination of the planets’ own orbital motions around the Sun, as well as our planet’s motion.

Keep in mind, the planets aren’t really close together in space. They lie tens, if not hundreds, of millions of kilometres apart. They appear close to each other in our sky because they lie along the same line of sight.

Do try to get up early enough — between 6 a.m. and 6:30 a.m. should do it — to look east to see the changing configuration of planets as they dance at dawn. Binoculars will provide the best view.

This is a rare sight! We won’t see these three planets this close to each other in a darkened sky until November 20, 2111! 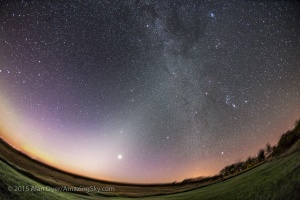 Venus, now at its brightest as a morning star, shines amid the subtle glow of the Zodiacal Light.

This was the scene this morning, September 17, on a very frosty dawn at 5 a.m. from my backyard in southern Alberta.

Here, Venus shines nearly as bright as it can be, at magnitude -4.7, in the dawn sky as a brilliant “morning star.”

Venus appears amid the faint glow of the Zodiacal Light, sometimes called the “False Dawn,” stretching diagonally from the dawn horizon in the east, up and to the right, and reaching the Milky Way that runs vertically down the frame from top centre to bottom right.

Orion and the winter stars shine in the Milky Way, with Sirius above the trees at lower right.

The Beehive Cluster, M44, appears as the small group of stars above Venus. The Pleiades, M45, is at top right.

Mars is the brightest object left of Venus, with the bright star Regulus just below it and rising in the east. The stars of the Big Dipper are at far left at the edge of the frame.

The sky is beginning to brighten with the real glow of morning. It was a marvellous dawn sky delight.

This is a stack of 4 x 2-minute exposures, tracked and mean-combine stacked, for the sky and 2 x 2-minute exposures, untracked and stacked, for the ground to minimize blurring in the starlit ground. The Canon 6D was on the iOptron Sky-Tracker, shooting at ISO 1250 with the 15mm full-frame fish-eye lens at f/3.5. The stacking with a mean combine stack mode smooths noise in both sky and ground.