Now and then I have the opportunity to test new equipment for astrophotography. That can be both a blessing and a curse — I get to try out new gear before I buy it to see if it really works first, which is nice. But if the equipment doesn’t work well, I might have wasted some valuable nights with little to show for it but some poor photos and lots of frustration. Not so with the gear pictured here. The Celestron CGEM mount, tested for SkyNews magazine, worked great, tracking very well and serving as the platform I used in late 2010 for a lot of astrophotos over two dark of the Moon periods. At about $1500 this is a superb entry-level mount for anyone serious about astrophotography.

I also can praise the Celestron NexGuide autoguider (with the glowing screen at right), shown here on a William Optics 66mm guidescope. It, and its near twin, the Synta SynGuider, worked very well — these are autoguiders to provide exact tracking of the mount over long exposures, a necessity even in the digital age. Unlike many autoguiders, these units are “stand-alone,” requiring no additional computer and able to run for many nights off a typical 12-volt power pack. They are great for use in the field. What’s more, the new autoguiders are quite low cost (~$300) compared to the $1000+ cost of previous models with similar capabilities. I reviewed these units for Sky and Telescope and for SkyNews.

The scope shown here is a favourite of mine, the A&M (now Officina Stellare) 105mm f/6 apo refractor, a beautiful Italian-made “designer scope” with first-class optics. It is a terrific visual and imaging telescope, though a little large for its aperture.

For more details about recommended autoguiders, see the website I developed to support The Backyard Astronomer’s Guide and follow the links to the Chapter 13 entries on astrophoto gear. 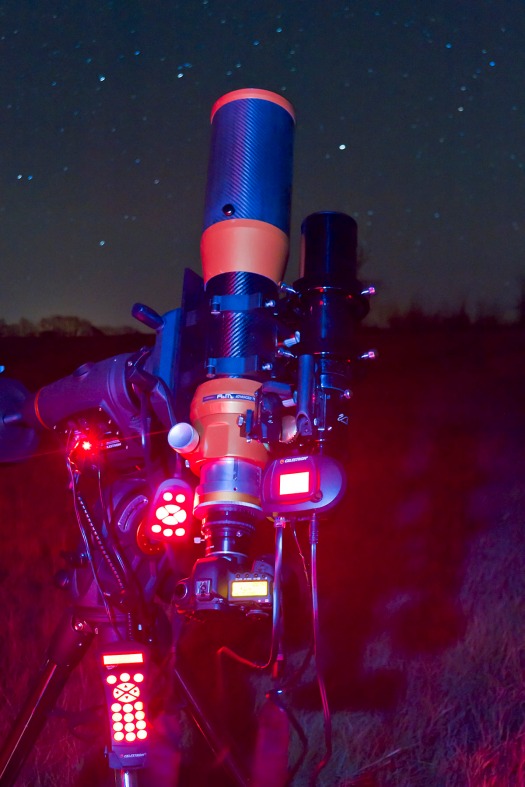