What an awesome spacecraft it has been — launching the Hubble Space Telescope, Ulysses and John Glenn! It returned NASA to manned spaceflight following both the Challenger and Columbia accidents. And now this week, we say goodbye to Space Shuttle Discovery. On Sunday night, Feb. 27, I took a look at it (perhaps my last), and the ISS, as they flew over together in an ideal pass across our sky. Even in binoculars you could see the shape of the ISS — or at least that it had a shape and was not just a star, as all other satellites appear. A great sight was watching the craft fly into Earth’s shadow and go deep red then fade out. That’s why the bright streak the ISS/Shuttle left on the frame during the time exposure fades out at left, as they fly to the east and experience sunset.

To the west (right) note the Zodiacal Light glow reaching up from the western horizon. Orion and Canis Major are at bottom in the south. To the northwest is my house. I purposely left the porch light on around the other side of the house to light up the yard and the photogenic old house on the property. It features in many of my backyard shots.

This shot is a two-image stack of 4-minute exposures, with the Canon 5D MkII at ISO 800 tracking the sky on an equatorial mount. The lens is one of my favourites, the Sigma 8mm full-circle fish-eye lens. Some haze in the sky knocked back the contrast, so the Milky Way doesn’t pop out as well as it should. Still, this was the first clear night in a while when it wasn’t -25°C! 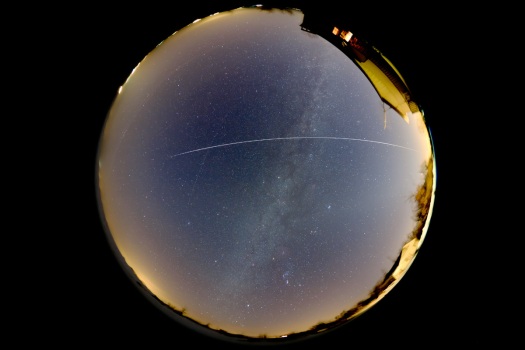