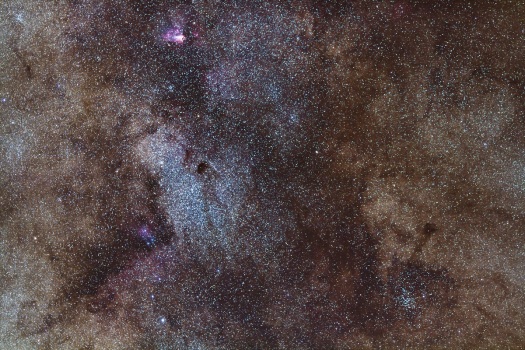 In this part of the sky the Milky Way takes on a surprising palette of hues. And it’s all due to dust.

The centrepiece of this shot is a bright star cloud in Sagittarius called, well, the Sagittarius Star Cloud! But not the Large one. This is the Small Sagittarius Star Cloud, a.k.a. Messier 24, a mass of stars with a single black eye. The dark spot, called Barnard 92, is a dense and opaque cloud of dust. Stardust — clouds of carbon soot blown out by aging stars — weaves all through this scene, creating the dark canyons winding through the stars. Obscuring dust also dims much of the background stars and discolours most of this part of the Milky Way a yellowish brown. It’s the same effect that dims the setting Sun a deep orange or red, as its light shines through haze and dust in the sky.

But here, the Star Cloud looks bluish and “cleaner.” That part of the Milky Way has less dust in front of it. And yet it is much farther away than the yellow dusty starfields around it. When we look toward the Small Sagittarius Star Cloud we are looking through a dust-free window, allowing us to see unencumbered right past our Galaxy’s nearby Sagittarius-Carina spiral arm to glimpse a dense part of the more distant Norma Arm, an inner spiral arm of our Milky Way Galaxy about 12,000 to 16,000 light years away.

To the lower right of M24 is M23, a rich cluster of stars 2,000 light years away, nearby by galactic standards, and so sits suspended in front of the fainter star background. The pinkish nebula at top is Messier 17, the Swan Nebula.

I took this shot May 2 from Chile, using the Canon 7D and 135 lens, for a stack of six 2-minute exposures.

2 Replies to “A Window in the Stars”