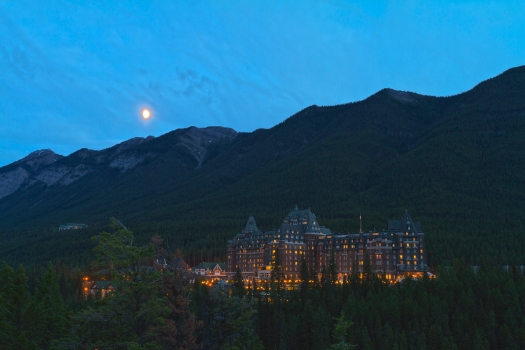 A weekend in Banff National Park — but three cloudy nights foiled the array of starry time-lapse shots I had hoped to take. But on Sunday night, July 10, I did get a nice evening shot of the Moon over the most famous Banff landmark.

This is the Banff Springs Hotel, in the deepening twilight as the gibbous Moon shone over Sulphur Mountain behind the hotel. I shot this from the overlook across the Bow River on Tunnel Mountain Drive, a popular spot by day for tourists to disembark by the busload and get their requisite shot. But at this time of night, about 11 p.m., I was the only one there. That’s the beauty of nightscape photography — you have the scene to yourself! And the bears.

Banff Springs is the epitome of a grand hotel. Opened in 1888 but since reconstructed and added to several times, the hotel was built by the Canadian Pacific Railway as the focal point for the tourists it planned to bring into the new Rocky Mountain Park, to take “the waters” in the Park’s sulphur hot springs and enjoy mountain wilderness in genteel splendour. I had the pleasure of staying there one night, in an upper room, courtesy of the Hotel as part of an astronomy outreach program we did there for Earth Hour in 2010. It was truly splendid!

For this shot, I combined three different exposures (1/2 second, 1.3 seconds and 3.4 seconds) in a High Dynamic Range stack, to bring out dark foreground detail but retain the still bright sky, and prevent the Moon from becoming too overexposed. So some Photoshop trickery was involved. But unlike many picture postcard scenes of the Moon sitting above a landmark, this one is real and has not had the Moon pasted into place, usually in a spot and orientation that is astronomically impossible! We astronomers hate that!