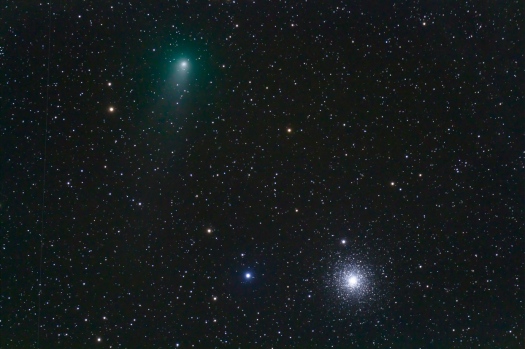 This was the scene Monday night and into Tuesday morning, August 1/2, as a relatively new comet to our skies passed a bright globular cluster known as M15 in Pegasus. The comet is Comet Garradd, or more formally C/2009 P1. Here it glows with the characteristic cyan tint of many comets and sports a stubby fan-shaped tail.

As comets move across the sky they often appear near prominent deep-sky objects for a night or two before moving on. Comet Garradd has a number of such encounters coming up: with the globular cluster M71 on August 26, and then near the neat Coathanger cluster September 1 through 3.

Comet Garradd can be spotted now from a dark site in big astronomy binoculars and is a fine sight in a telescope. However, it is well below the threshold of naked-eye brightness and is expected to remain so as it moves high across the summer sky from east to west and then into the western evening sky in late autumn. It is certainly well-placed for viewing, but only comet aficionados are likely to pay much attention to it. Plus astrophotographers taking advantage of photo ops like this one.