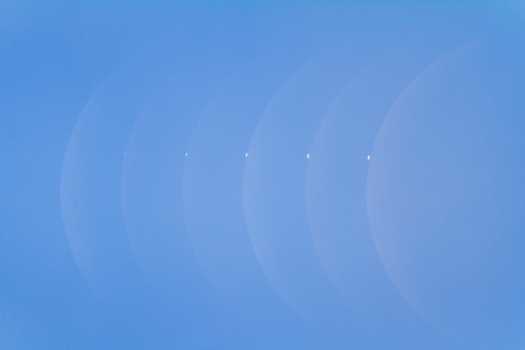 On the afternoon of Monday, August 13 the waning crescent Moon slid in front of Venus in broad daylight. This sequence captures the disappearance.

It was touch and go getting this as high cloud kept moving through. A few minutes earlier the Moon and Venus were in clear blue sky, but at the time of the occultation, haze whitened the sky and cut down the  contrast on an event that takes a telescope to see well. When the sky was clear it was easy to sight the Moon with unaided eyes and therefore focus your eyes on infinity. Venus next to the Moon popped into view, even naked eye. It was a rare chance to easily sight Venus in the daytime. But as it got close to the Moon Venus became harder to see naked eye, and the haze then made it impossible. But through a telescope it was just the opposite — Venus’s bright disk stood out even when the Moon was washed out and invisible.

For southern Alberta the occultation took place at 2:11 pm MDT. I missed seeing it emerge from behind the Moon. I was already inside processing this image.

It has been quite a year for Venus. It’s not over yet, as Venus continues its morning show and has close encounters with the Moon and the star Regulus this autumn.