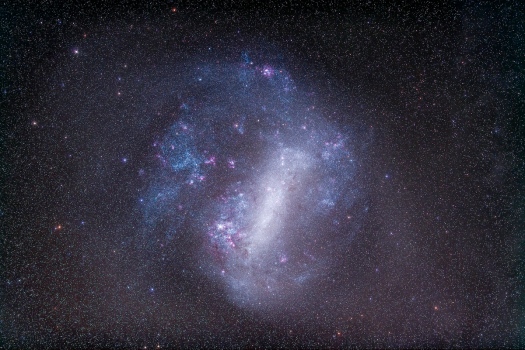 If this was the only unique object in the southern sky that we couldn’t see from up North, then it would still be worth travelling south of the equator to see the southern sky.

This is the Large Magellanic Cloud, a satellite galaxy to our Milky Way. Being “just” 160,000 light years away (as opposed to millions of light years for most galaxies) this object is large (it fills the field of binoculars) and is rich in detail. Just look at all the pinkish nebulas dotting its ragged structure. The biggest is near the bottom, the massive Tarantula Nebula. Through a telescope there is so much to see in this object it takes careful comparisons with charts and atlases over several nights just to figure out what all the nebulas and clusters are in the eyepiece. It is a deep-sky observer’s dream object. While several professional astronomers have made their careers studying just the Magellanic Clouds.

Once classed as an irregular, ragged galaxy, the “LMC” is now thought of as a barred spiral. I think this photo suggests the two spiral arms coming off the top and bottom of the central elongated bar.

I shot this last night, under a perfect night of viewing in Coonabarabran, Australia, using a 135mm telephoto lens. The field is similar to what you see in binoculars though the long exposure (this is a stack of ten 5-minute tracked exposures) brings out more detail than the eye can see. Compare this wide view with a higher magnification shot I took two years ago from the same location. Both are good but I like this wider view better as it sets this big object into the celestial frame of the surrounding night sky.

One Reply to “Depth of Detail in the Large Magellanic Cloud”