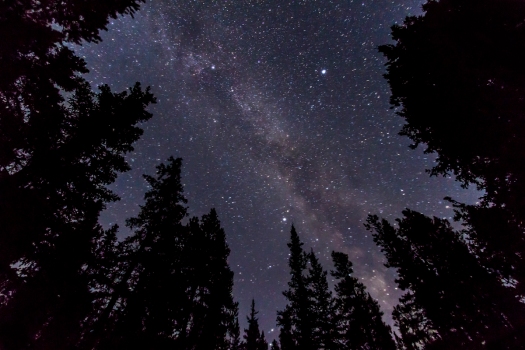 This is the classic summer campsite shot, looking up through the trees to the Milky Way.

I shot this Saturday night from a favourite viewpoint in Banff at Saskatchewan River Crossing. The night proved to be less than the perfectly clear I had hoped for, so I settled for Plan B and shots looking up to a nearby nightscape scene, rather than out across a landscape and into horizon clouds. Some drifting clouds in this shot blur the stars.

This is an example of the type of simple nightscape anyone can do with a camera on a tripod. There’s no tracking going on here, just a short 70-second exposure, enough to pick up the Milky Way. The little trailing of the stars that results isn’t objectionable. I could have shortened the exposure and decreased the trailing but only by going to a higher ISO speed like ISO 3200 which, with the Canon 7D camera, is pushing it too much for noise in a shot like this.

Better still would have been to place the camera on a tracking platform. expose longer at an even slower, less noisy ISO speed, and then let the trees blur from the camera’s motion as it followed the stars. It would have simply looked like a windy night.

Or, it’s possible to combine tracked and untracked exposures, one for the sky and one for the ground, using Photoshop magic.

But I did neither here. This is an unadulterated image of the summer sky shining through trees.