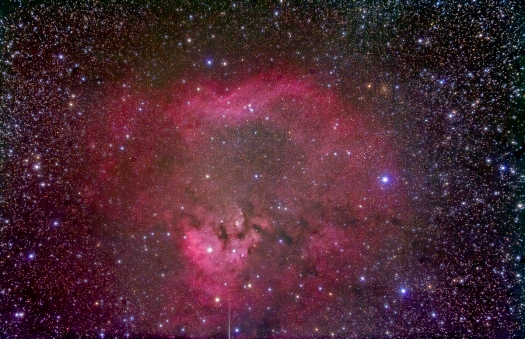 Sitting on the border of Queen Cassiopeia and King Cepheus is this royal cloak of pinks and reds.

Too faint to see even in a small telescope, the main cloud of nebulosity is called NGC 7822, with a companion cloud below known as Cederblad 214. Rather cold names for a stunning region of space.

I love the colours in this field. The camera I use is modified to bring out the reds of glowing hydrogen but also nicely picks up blues and purples, which mix to provide subtle shades of pink and magenta. There are even yellows and greens from dust clouds.

Yes, I’ve certainly punched up the colour and contrast quite a bit from what came out of the camera, but I tried to retain a “natural” colour balance, not skewing the palette too far to the deeply saturated monotone red I see in some images of nebulas.

I shot this Saturday night, October 6, from my backyard on a fine autumn night for stargazing and star shooting. It’s a stack of eight 12-minute exposures, “median” combined to eliminate the satellite trails that crossed several frames.