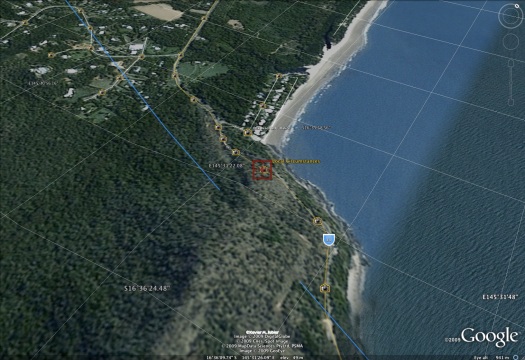 This isn’t a photo I’ve taken. Instead it’s where I plan to be in three weeks taking photos.

The blue line is the centreline of the November 14 total eclipse of the Sun. The scene is on the Cook Highway coastal road just south of Port Douglas in northern Queensland, Australia.

Three of the beach houses on Oak Beach Road on the Queensland coast is where several of us Canadian eclipse chasers will gather to view the total eclipse, weather permitting! The eclipsed Sun will be to the east, over the ocean shortly after sunrise. We’ve had the houses rented since late 2009.

Eclipse chasing usually takes long term planning. Very few people can say years in advance where they will be on a date like November 14, 2012. But we can!

Eclipses govern a good part of our lives. And we love it!