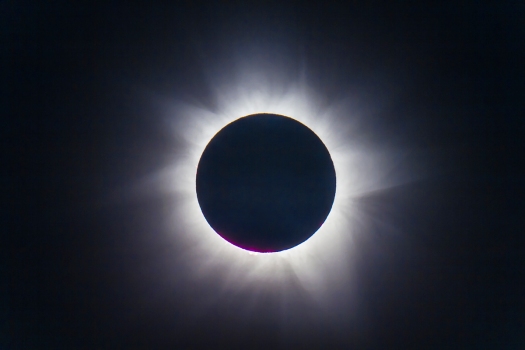 Taken shortly into totality, this shot shows some of the complex structure of the Sun’s corona, and a cluster of red prominences peaking out from behind the bottom edge of the Moon.

For the November 14, 2012 eclipse I shot two cameras. One, with a wide-angle lens, was automatically taking a frame every second. Three of those frames are in a previous blog. For this shot I used a second camera looking through a 4-inch refractor telescope I keep stored in Australia. It worked great! I seldom get to shoot an eclipse through a telescope, as so many eclipses are in remote locations where carting a telescope and mount are impractical. But for an Oz eclipse (I’ve seen two from Australia now, in 2002 and now in 2012) I get to use my Oz gear.

Because the Sun is nearing solar maximum its corona appeared evenly distributed around the Sun, with streamers reaching out in all directions. At solar minima eclipses the corona extends just east-west with little over the poles.

This image, like the other closeups I’m posting, are still frames shot while the camera was taking an HD movie. Firing the shutter while the movie is recording interrupts the movie but records a full-resolution still frame, a very nice way to get two forms of media with one camera.