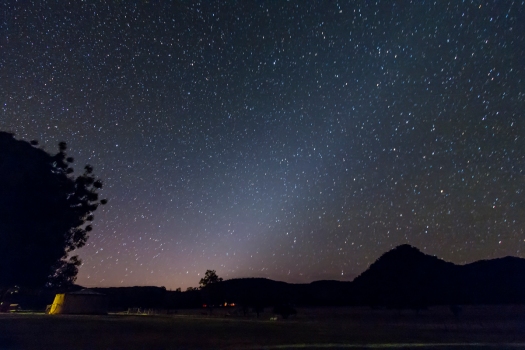 From a truly dark sky site, subtle sky glows become obvious. This is the Zodiacal Light of evening.

The Sun has long set and the very last glow of twilight is colouring the sky just above the hills. But reaching up from the sunset point in the northwest is a long triangular glow extending far to the south. This is called the Zodiacal Light – it does not originate in our atmosphere but is from sunlight reflecting off comet dust orbiting the inner solar system in the same plane as Earth’s orbit. Or at least that’s where we see it appearing the brightest, as a glow brightest near the Sun and extending along the ecliptic plane, where we find the constellations of the Zodiac. Here it appears in Capricornus and Aquarius.

I shot this two nights ago, from Coonabarabran, Australia, so the orientation of the Zodiacal Light is different from what we see from the Northern Hemisphere. Here it extends up from left to right. From home in Canada – and you can see the Light from northern latitudes on a dark night – it would be angled up from right to left, a mirror image of what we see here.

The subtle glow of Zodiacal Light is best seen in the evening sky in spring, no matter your hemisphere. I took this on December 6, 2012, still officially spring in the southern hemisphere if you assume southern summer starts on the solstice, December 21. However, Australians say summer begins December 1, so this is a portrait of the Zodiacal Light on a warm summer evening down under.

One Reply to “Catching the Zodiacal Light”