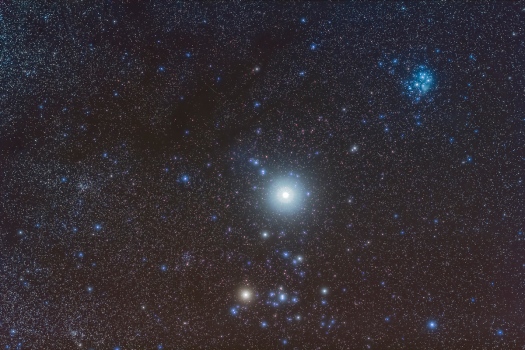 Look up on a clear night this season (winter for us in the northern hemisphere) and you’ll see a bright object shining in Taurus the bull. That’s Jupiter.

This year Jupiter sits in a photogenic region of the sky, directly above the stars of the Hyades star cluster and yellow Aldebaran, the brightest star in Taurus. Above and to the west (right) of Jupiter is the blue Pleiades star cluster.

Over the course of January 2013 you’ll be able to see Jupiter move a little further west each night (to the right in this photo) away from Aldebaran and toward the Pleiades. Jupiter will stop its retrograde motion on January 30. After that it treks eastward to again pass above the Hyades and Aldebaran (returning to where it is now) in early March.

Jupiter’s proximity to Aldebaran and the Hyades makes it easy to follow its retrograde loop over the next few weeks. It’s an easy phenomenon to watch, but explaining it took society hundreds of years and the ultimate in paradigm shifts in thinking, from the self-important arrogance that Earth – and we – were the centre of the universe, to the Sun-centered view of space, with Earth demoted to being just one planet orbiting our star.

I took this image Friday night, January 4, from home as my first astrophoto upon returning to Canada from Australia. It’s a combination of two sets of images: one taken “straight & unfiltered” and one taken through a soft-focus filter to add the glows around the stars and central, brilliant Jupiter. I then blended the filtered images onto the normal images in Photoshop with the Lighten blend mode.