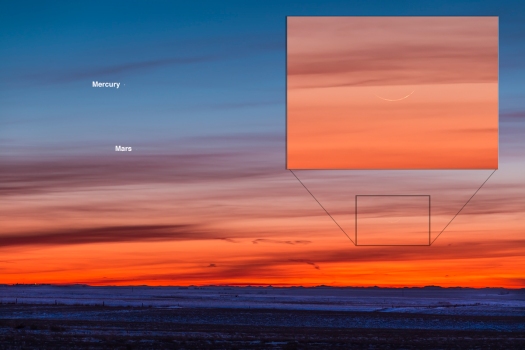 This was the sky scene Sunday night, February 10, as an ultra-thin Moon entered the evening sky, providing me with a “personal best” for sighting a young Moon.

I’ve had to highlight and annotate the subjects here but all the players were obvious in binoculars. Only Mercury, usually the most elusive planet, was obvious to the naked eye. Below it shone dimmer Mars, here embedded in some cloud.

But the real catch of the night was the 18-hour-old crescent Moon, shimmering low in the red twilight. It appears as a razor-thin crescent, magnified in the inset. Sighting any Moon younger than 24 hours old is considered a find, the all-time record being a Moon about 14 hours old. I’m happy with an 18-hour catch!

On Sunday night conditions were nearly ideal, despite the clouds, with the Moon angled about as far from the Sun as it could be from my northern latitude, positioned directly above the sunset point. You can tell that because the crescent, which must be oriented toward the Sun, appears nearly horizontal.

This is the New Moon that also signals the start of the Chinese New Year, the Year of the Snake.  So 迎春接福 !