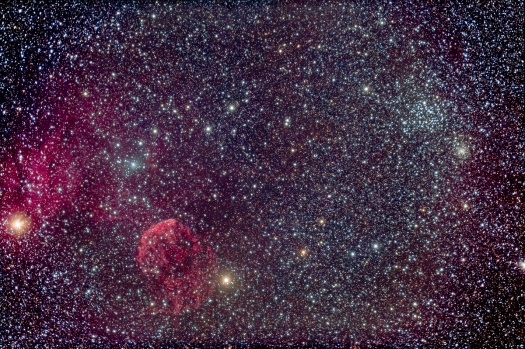 This one image frames examples of both the beginning and end points of a star’s life.

I shot this last night, February 6, 2013, capturing a field in the constellation of Gemini the twins. At upper right is the showpiece star cluster known as Messier 35. It’s a collection of fairly young stars still hanging around together after forming from a cloud of interstellar gas tens of millions of years ago. M35 lies about 2,800 light years from Earth, on the other side of the spiral arm we live in. Just below M35 you can see another smaller and denser cluster. That’s NGC 2158, about five times farther away from us, thus its smaller apparent size. Both are objects that represent the early stages of a star’s life.

At lower left is an object known as the Jellyfish Nebula, for obvious reasons. The official name is IC 443. It’s the expanding remains of a star that blew up as a supernova anywhere from 3,000 to 30,000 years ago. What’s left of the star’s core can still be detected as a spinning neutron star. You need a radio telescope to see that object, but the blasted remains of the star’s outer layers can be seen through a large backyard telescope as a shell of gas. It is expanding into the space between stars – the interstellar medium – ploughing into other gas clouds. The shockwave from its collision with other nebulas may trigger those clouds to collapse and form clusters of new stars. And so it goes in the Galaxy.

For this portrait of stellar lifestyles, I used a 92mm apochromatic refractor and a new Canon 6D camera, one that has had its sensor filter modified to accept a greater range of deep red light emitted by hydrogen nebulas. The image is actually a stack of 12 exposures with an accumulated exposure time of 80 minutes. 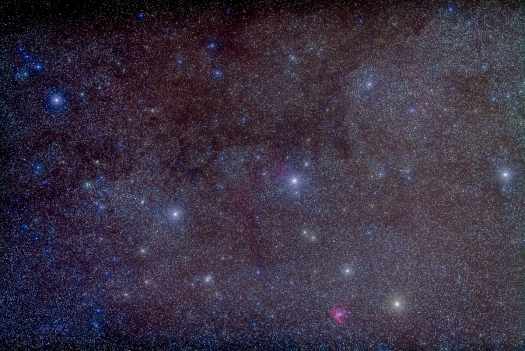 After the 7 stars of the Big Dipper and the 3 stars of Orion’s Belt, these 5 stars are likely the most well-known in the northern sky.

These are the 5 bright stars of Cassiopeia the queen, better known simply as “the W” in the sky. Her five stars come in a range of colours, from blue giant Segin at upper left to yellow giant Shedar at lower right.

Scattered around Cassiopeia you can also spot at least one bright red nebula, the “Pacman Nebula,” plus a faint patch of purple nebulosity just above central Navi, the middle star of the W also known as Gamma Cassiopeiae. A few wisps of fainter reddish nebulosity and lanes of dark dust wind around the queen’s celestial throne. The left side of the W – the back of the throne –  is also home to several clumps of stars, nice open clusters suitable for binoculars or any telescope.

I shot this portrait of the Queen on Wednesday night, February 6, on a cool and frosty winter night in my backyard. For the set of 8 images that went into this stack I used a new tracking device, the iOptron SkyTracker. It’s a nifty little battery-powered tracker, compact but very solid. And it tracks very well. For this portrait I used a 135mm telephoto lens, and most, though not all, shots were very well tracked with pinpoint stars. A few frames showed a bit of trailing, not unusual for small portable tracking mounts. At $400 the little iOptron SkyTracker is a great accessory for anyone wanting to shoot constellations and the Milky Way with wide-angle to telephoto lenses.