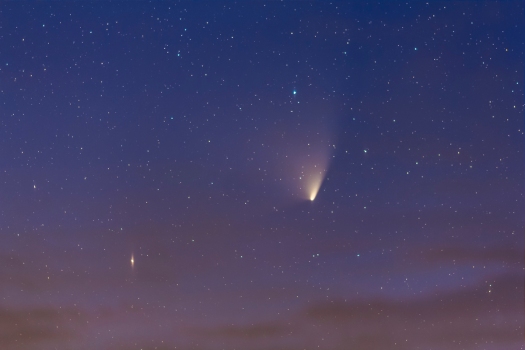 At last. A view of Comet PANSTARRS in a dark and moonless sky.

Nearly three weeks after first sighting it, I was able to finally look at and shoot the comet in a fairly dark sky, though with it still embedded in deep twilight. But at least the Moon was out of the way and the sky was dark enough to allow the comet to show off its broad fan-shaped dust tail, set against the stars of Andromeda.

The comet will climb a little higher during the next two moonless weeks as it passes the Andromeda Galaxy on April 2 and 3. However, it’s still very low in the northwest and needs binoculars to sight. You have to wait until the sky is dark to spot it. And hope for no clouds low in the northwest. The comet just dodged some here.

I shot this with a 200mm telephoto for a stack of eight 30-second exposures tracking the stars. The star at left is Delta Andromedae while the one above the comet is Pi Andromedae.