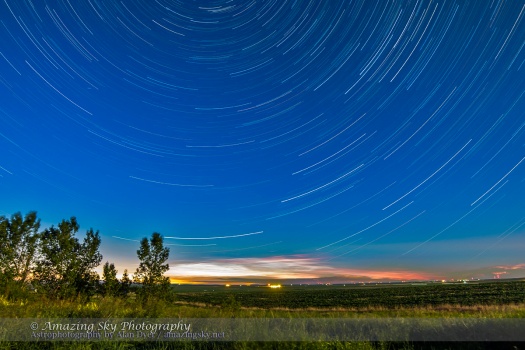 It was a beautiful summer evening, with stars wheeling overhead in a moonlit sky and the only clouds far away and interesting.

This was one of those nights we get once or twice a summer when the much-anticipated noctilucent clouds – the clouds of summer – put on a perfect show. In my previous post I featured an image from early in the night, last night, June 26, 2013.

These are images and time-lapse movies from later in the night. The composite image above shows stars trailing over 90 minutes with the brilliant noctilucent clouds on the horizon, and fringed by a rosy glow of red twilight where the southern edge of the cloud display, which sits over the Northwest Territories, is being lit by a setting Sun with red sunlight filtering through our atmosphere as it passes over the North Pole. 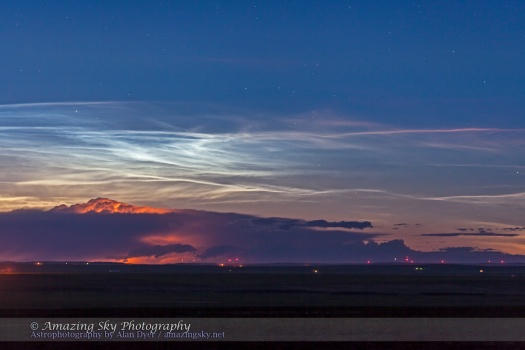 This telephoto lens shot above captures a close-up of the rosy-fringed noctilucent clouds, behind a lightning-lit thunderstorm rolling through storm alley in central Alberta. The storms can stay there! We’ve had enough of them for a while!

My time-lapse sequence extends over about 90 minutes and opens with a wide-angle view of the display as it appeared low on the horizon. What follows are two closeup views that really show the intricate wave-like motion of these high-altitude mesospheric clouds, and their changing lighting and colours.

These are beautiful clouds drifting on the edge of space but it takes time-lapse to reveal their fluid-like motion. 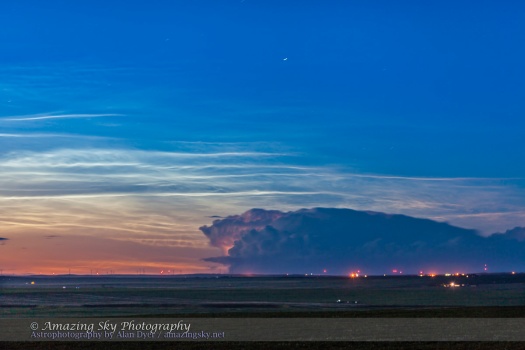 Two very different forms of clouds drift along the horizon: a thunderstorm nearby and low, and noctilucent clouds far away and high.

This was the scene last night, as another thunderstorm to the north of me rolled along the horizon drifting away to the east. A bolt of lightning illuminates the storm clouds. The thunderstorm was over central Alberta, and at the bottom of our atmosphere, in the troposphere.

Meanwhile, in the background, a beautiful display of noctilucent clouds crept along the horizon in the other direction, drifting to the west. These clouds were over the Northwest Territories, a thousand or more kilometres away to the north and 80 to 100 kilometres high, at the top of the atmosphere in the mesosphere.

The NLC display lasted all night, or for at least as long as I was able to stay up and shoot.

This is a telephoto lens shot that zooms into the brightest part of the NLC display.

Join 8,521 other followers
Follow The Amazing Sky on WordPress.com