The sky seems to swirl in a rainstorm of stars.

I’ve combined several exposures of the stars in the northern sky to create a “comet trail” effect, showing them turning about the celestial pole. The top photo looks northwest to the stars around the Big Dipper and picks up the purple light of a faint aurora.

For the photo below, taken on a different night, I used a fish-eye lens to capture the entire sky, but looking north. You can see how the sky turns counterclockwise about the Pole Star. The Milky Way also appears as a blurred band of light. 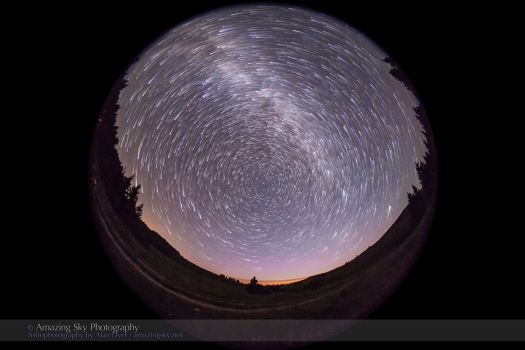 I shot these last week from the cabin at Reesor Ranch in Saskatchewan during a wonderful week of nightscape photography in the Cypress Hills.

To create these images I used the Advanced Stacking Actions from Star Circle Academy.