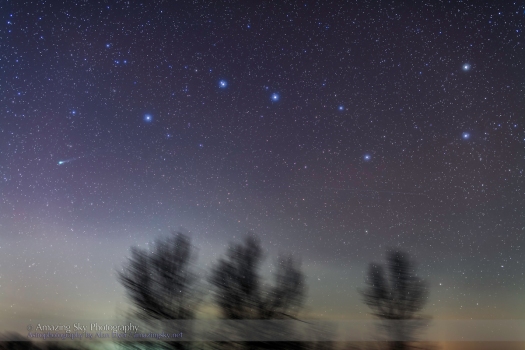 The handle of the Big Dipper seems to point down to Comet Lovejoy, low in the northern sky.

While the astronomy world waits and watches as Comet ISON rounds the Sun in the next day, another comet is appearing in the evening sky.

This is Comet Lovejoy, aka C/2013 R1, captured in a set of exposures I took about 6:30 pm on Wednesday evening, November 27, when the comet shone off the handle of the Big Dipper. It was not visible to the naked eye but was easy in binoculars. The photo shows Comet Lovejoy as cyan-tinted star at left with a spiky tail pointed away from the Sun.

From my latitude of 51° N Comet Lovejoy sits far enough north to be circumpolar, though just barely. However, as it heads south it will become just a morning sky object, especially for those at more southerly latitudes. In the coming days it will join Comet ISON (or what’s left of it) in the December dawn.