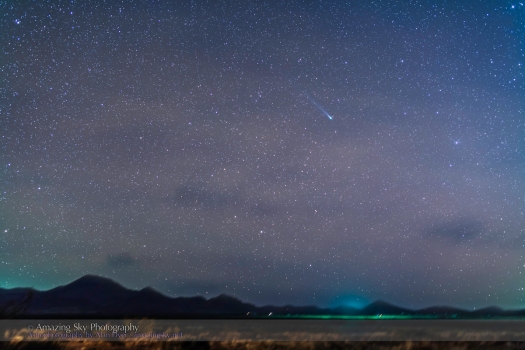 Comet Lovejoy shines above the New Mexico desert in the pre-dawn sky.

We came here for Comet ISON but have had to settle for Comet Lovejoy, a decent enough comet in the morning sky, but not the spectacle we had hoped for.

This was Comet Lovejoy (C/2013 R1) as it appeared this morning, December 6, under very good New Mexico skies marred only by some scattered clouds and patches of airglow. The main image is a 50mm lens shot of the wide scene looking east.

The comet was visible to the naked eye, but just barely as a fuzzy star. It took the long exposure photos to bring out its blue ion tail, stretching 6° to 10° across the sky and pointed down toward the sunrise point in the east.

I took the close-up shot above with a 135mm telephoto lens showing the bright head and faint ion tail. The tail here measures 6° long, though a deeper exposure might have picked up more, up to 10° long. But I think reports of seeing a tail up to 5° long with the naked eye are wishful seeing. The comet and tail are not that obvious, and we are in superb skies.

Still, Lovejoy makes a fine comet consolation prize, substituting for the ill-fated Comet ISON. It was a beautiful morning to enjoy Lovejoy in the quiet and star-filled New Mexico dawn.

One Reply to “Enjoying Lovejoy, the Consolation Comet”