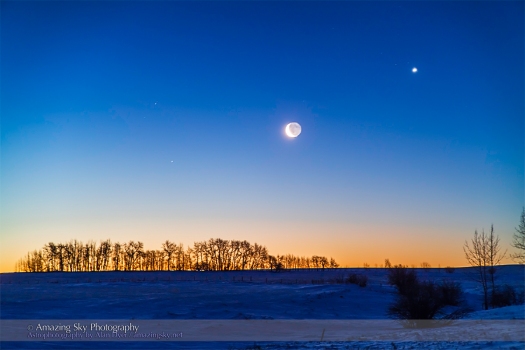 This was the scene at dawn on a cold winter morning as the waning Moon appeared near Venus.

The temperature was only -15° C, so rather pleasant compared to the -30° C it has been the last couple of mornings. On February 26, I awoke at 6 a.m. and ventured into the cold winter morning to shoot the conjunction of the crescent Moon beside Venus above the snowy landscape of southern Alberta.

This was not a particularly close conjunction, at least not for us in North America. But its location low on the southeast horizon made the scene attractive and photogenic.

I aimed the camera the other way, to the southwest, to catch bright Mars (at right near Spica in Virgo) and Saturn (at left in Libra) above the abandoned farmhouse. The stars of Scorpius shine at left.

So we had three planets visible at dawn this morning, a fine sight to start the winter day.