The southern Milky Way arches across the sky, with the centre of the Galaxy overhead at dawn.

This was the sky at 4:30 this morning, as Venus rose in the east (to the right) amid the zodiacal light, and with the Milky Way soaring overhead. This image is a 360° panorama of the scene, with the zenith, the overhead point, at the top centre of the frame.

The location is the Two Styx Cabins, on the border of New England National Park in New South Wales, Australia. The cabin with the light on (I left it on on purpose for the photo) is where I stayed for two nights in splendid isolation.

The panorama is a stitch of 6 frames shot with an 8mm fish-eye lens, each 1-minute exposures on an untracked tripod. I used the PTGui software program to assemble the pan.

Below is an alternative rendering, in spherical format, to create the more classic “fish-eye” view, but one extending well below the horizon. So this is not one image but a stitch of six. 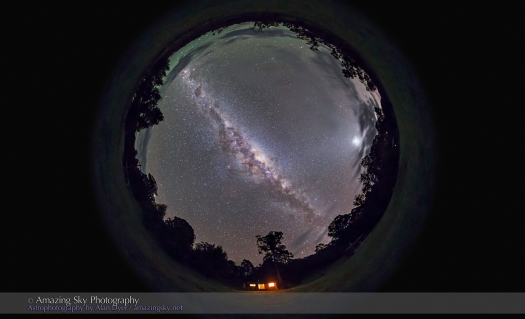 In this version you can more readily see the spectacle of the Milky Way at dawn in the southern hemisphere autumn months, with the bulge of the galactic core directly overhead as seen from this latitude of 30° south. It is a wonderful sight.

This is my last view of it for this trip. Till next year!