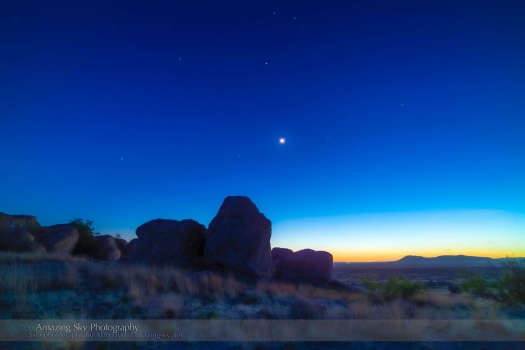 This was the scene tonight, May 2, under fabulous skies on a warm spring evening in New Mexico. I drove 45 minutes south from Silver City to the City of Rocks State Park, and area of oddly-eroded rocks and a fabulous place for stargazing. It actually has an observatory.

For this twilight scene I shot a series of seven exposures from dark to bright with an ultra-wide 14mm lens, and stacked them in a high dynamic range composition to capture both the bright Moon and sky above and dark landscape below. You can see the stars of the winter sky disappearing into the evening twilight as well, plus Jupiter at top.

For the next three nights I’ll be back near the Arizona Sky Village just across the state line from Rodeo, New Mexico, under very dark skies, to shoot the summer Milky Way in the wee hours of the morning after moonset. The weather promises to be perfect.

2 Replies to “Twilight over the City of Rocks”