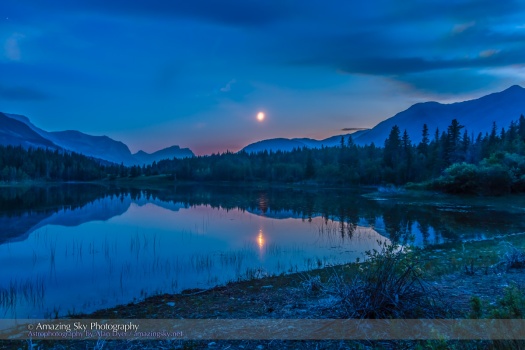 What an excellent evening this was. On July 2 I was at a newly discovered spot, the Whitefish picnic area, in Bow Valley Provincial Park between Calgary and Canmore, Alberta.

I was there with colleagues doing a shoot for a promotional video for a project I’m involved with. But after the business shoot, I stuck around to take my own shots for time-lapse movies and still images.

In the scene above the Moon is reflected in the still waters of Middle Lake in the Park. It’s a high dynamic range stack of seven exposures. 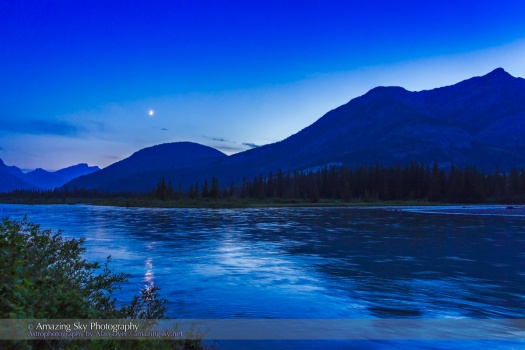 Here, a little earlier in the evening is the scene on the banks of the Bow River, with the Moon over the swiftly flowing waters of the glacier-fed Bow. Its waters nourish much of southern Alberta, making farming, industry and life possible in an otherwise dry, rain-shadow climate.

Though a year ago its flood-swollen waters were bringing disaster to many people along the Bow. 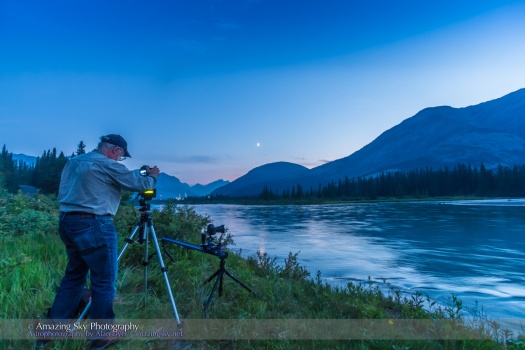 This evening I shot motion-control time-lapses by the Bow, using some new gear that slowly pans or turns cameras during a time-lapse shoot. This is me playing with the new eMotimo controller, while the Dynamic Perception dolly does its thing below.