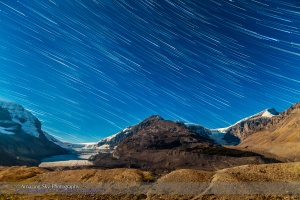 The stars trail over the glaciers of the Columbia Icefields.

What an amazing night this was! You rarely get pristine cloudless skies over the Icefields. Some cloud is almost always blowing off the ice. But last Saturday in Jasper National Park was as clear as it gets.

The Moon was bright, as a waxing gibbous just off frame at left. It lit the landscape like it was day.

I shot with two cameras, one doing a time-lapse motion control sequence panning across the scene. The other was a fixed camera shooting 20-second exposures at 1-second intervals. The resulting frames from the fixed camera, 270 in this case, are multi-purpose:

– I stacked about 100 of them to make the star trail composite above. Two frames supplied the stars at the beginning and end of the trails. Another single frame supplied the ground, to avoid the shadows being blurred by the Moon’s motion if you used the ground composited from all 100 frames.

– I can also take the full set of 270 frames and sequence them into a time-lapse movie of the stars moving over the landscape.

Before beginning the time-lapse sequences I shot this 180° panorama, made of 5 segments stitched in PTGui software. It extends from the southwest at left, where the Milky Way is barely visible, to the north at right, with the Big Dipper over the Icefields Parkway.

This is the camera setup, with the camera on the right taking the star trail image I feature at top.

The Athabasca Glacier is at left, the Stutfield Glacier at right.

Midnight under moonlight is when to see the Icefields! This is the lower parking lot, at the start of the trail up to Athabasca Glacier. This is packed with cars, RVs and buses by day, but at night I was the only one there. 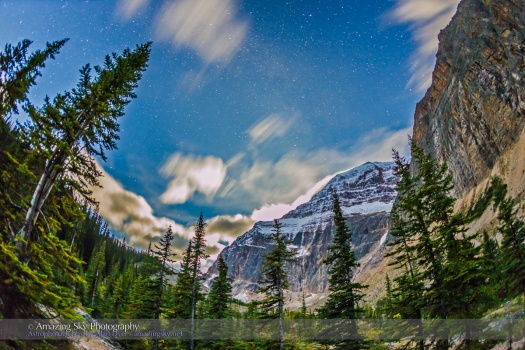 The stars of the summer sky shine over the North Face of Mt. Edith Cavell.

The valley below Mt. Edith Cavell in Jasper National Park is one of the most impressive locations in the Canadian Rockies. At few other sites do you get the sense of standing at the foot of a vertical mountain face.

I shot this view last Friday night, when the waxing Moon was behind the mountain, lighting the clouds and sky but not the mountain and valley directly.

But enough scattered light came from the sky to light the foreground and mountain face to make a nice photo with detail in both earth and sky.

Use of highlight and shadow recovery in Adobe Camera Raw also helps a lot!

This view is a 360° ground-to-zenith panorama I shot earlier in the evening in twilight. It’s from the Trail of the Glacier path, where the path crosses Cavell Creek.

Mt. Edith Cavell was named in 1916 after the World War One nurse who was executed by the Germans for assisting allied soldiers escape occupied Belgium.