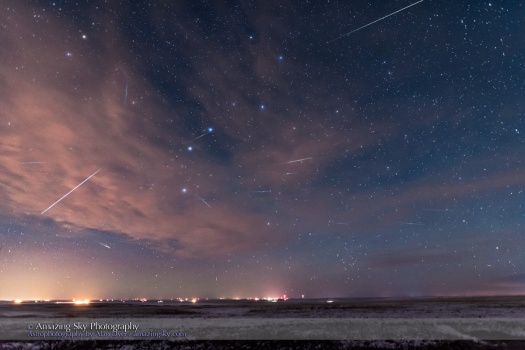 The Quadrantid meteors streaked out of the northern sky on a fine winter’s night.

The temperature was mild and skies clear in the early evening for the annual Quadrantid meteor shower. This is a prolific but short-lived shower with a brief peak. The cold and low altitude of its radiant point keeps this shower from becoming better known.

This was the first year I can recall shooting it. I had some success during a 2-hour shoot on January 3, from 9 to 11 pm MST.

The result above is a stack of 14 images, the best out of 600 shot that recorded meteors. The ground and sky comes from one image with the best Quad of the night, and the other meteor images were masked and layered into that image, with no attempt to align their paths with the moving radiant point.

However, over the 2 hours, the radiant point low in the north would not have moved too much, as it rose higher into the northern sky.

Most of the meteors here are Quads, but the very bright bolide at left, while it looks like it is coming from the radiant, it is actually streaking toward the radiant, and is not a Quadrantid. But oh so close! I left it in the composite for the sake of the nice composition!