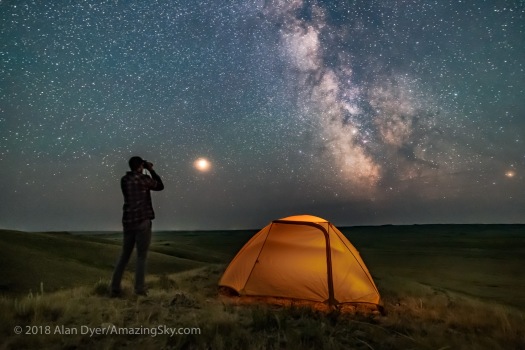 I spent a wonderful week touring the star-filled nightscapes of southwest Saskatchewan.

On their license plates Saskatchewan is billed as the Land of Living Skies. I like the moniker that Saskatchewan singer-songwriter Connie Kaldor gives it – the sky with nothing to get in the way.

Grasslands National Park should be a mecca for all stargazers. It is a Dark Sky Preserve. You can be at sites in the Park and not see a light anywhere, even in the far distance on the horizon, and barely any sky glows from manmade sources.

The lead image shows the potential for camping in the Park under an amazing sky, an attraction that is drawing more and more tourists to sites like Grasslands.

This is a multi- panel panorama of the Milky Way over the historic 76 Ranch Corral in the Frenchman River Valley, once part of the largest cattle ranch in Canada. Mars shines brightly to the east of the galactic core.

Mars and the Milky Way over the tipis at Two Trees area in Grasslands National Park, Saskatchewan on August 6, 2018. Some light cloud added the haze and glows to the planets and stars. Illumination is by starlight. No light painting was employed here. This is a stack of 8 exposures for the ground, mean combined to smooth noise, and a single untracked exposure for the sky, all 30 seconds at f/2.8 with the Sigma 20mm lens, and Nikon D750 at ISO 6400 with LENR on.

Mars (at left) and the Milky Way (at right) over a single tipi (with another under construction at back) at the Two Trees site at Grasslands National Park, Saskatchewan, August 6, 2018. I placed a low-level warm LED light inside the tipi for the illumination. This is a stack of 6 exposures, mean combined to smooth noise, for the ground, and one untracked exposure for the sky, all 30 seconds at f/2.2 with the 20mm Sigma lens and Nikon D750 at ISO 3200.

The Big Dipper and Arcturus (at left) over a single tipi at the Two Trees site at Grasslands National Park, Saskatchewan, August 6, 2018. This is a stack of 10 exposures, mean combined to smooth noise, for the ground, and one untracked exposure for the sky, all 30 seconds at f/2.8 with the 20mm Sigma lens and Nikon D750 at ISO 6400. Light cloud passing through added the natural star glows, enlarging the stars and making the pattern stand out. No soft focus filter was employed, and illumination is from starlight. No light painting was employed. Some airglow and aurora colour the sky. A Glow filter from ON1 Photo Raw applied to the sky to further soften the sky.

At the Two Trees site visitors can stay in the tipis and enjoy the night sky. No one was there the night I was shooting. The night was warm, windless, and bug-less. It was a perfect summer evening.

From Grasslands I headed west to the Cypress Hills along scenic backroads. The main Meadows Campground in Cypress Hills Interprovincial Park, another Dark Sky Preserve, is home every year to the Saskatchewan Summer Star Party. About 350 stargazers and lovers of the night gather to revel in starlight.

The Perseid meteor shower over the Saskatchewan Summer Star Party, on August 10, 2018, with an aurora as a bonus. The view is looking north with Polaris at top centre, and the Big Dipper at lower left. The radiant point in Perseus is at upper right. The sky also has bands of green airglow, which was more prominent in images taken earlier before the short-lived aurora kicked up. The aurora was not obvious to the naked eye. However, the northern sky was bright all night with the airglow and faint aurora. This is a composite of 10 images, one for the base sky with the aurora and two faint Perseids, and 9 other images, each with Perseids taken over a 3.3 hour period, being the best 9 frames with meteors out of 360. Each exposure was 30 seconds at f/2 with the 15mm Laoawa lens and Sony a7III at ISO 4000. I rotated all the additional meteor image frames around Polaris to align the frames to the base sky image, so that the added meteors appear in the sky in the correct place with respect to the background stars, retaining the proper perspective of the radiant point.

A Perseid meteor streaks down the Milky Way over the Saskatchewan Summer Star Party in the Cypress Hills of southwest Saskatchewan, at Cypress Hills Interprovincial Park, a Dark Sky Preserve. The Milky Way shines to the south. About 350 stargazers attend the SSSP every year. Observers enjoy their views of the sky at left while an astrophotographer attends to his camera control computer at right. This is a single exposure, 25 seconds, with the Laowa 15mm lens at f/2 and Sony a7III camera at ISO 3200.

This year coincided with the annual Perseid meteor shower and we saw lots!

Most nights were clear, and warmer than usual, allowing shirt-sleeve observing. It was a little bit of Arizona in Canada. Everyone enjoyed the experience. I know I did!

SSSP and Cypress Hills are stargazing heaven in Canada.

From Cypress Hills I drove due north to finally, after years of thinking about it, visit the Great Sandhills near Leader, Saskatchewan. Above is a panorama from the “Boot Hill” ridge at the main viewing area.

The Sandhills is not a provincial park but is a protected eco zone, though used by local ranchers for grazing. However, much of the land remains uniquely prairie but with exposed sand dunes among the rolling hills.

There are farm lights in the distance but the sky above is dark and, in the panorama above, colored by twilight and bands of red and green airglow visible to the camera. It’s dark!

In the twilight, from the top of one of the accessible sand dunes, I shot a panorama of the array of four planets currently across the sky, from Venus in the southwest to Mars in the southeast.

This is the kind of celestial scene you can see only where the sky has nothing to get in the way. 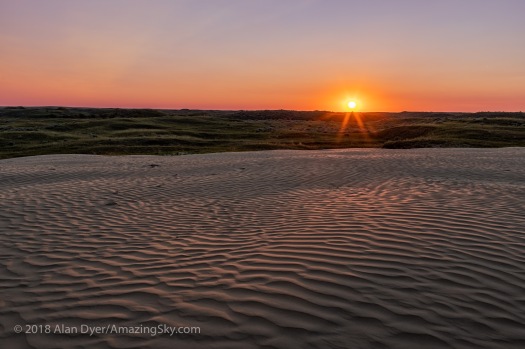 If you are looking for a stellar experience under their “living skies,” I recommend Saskatchewan.