It sits not far away in the deep southern sky from its larger counterpart, but it must feel rather inferior and sadly neglected. Pity as this object does have lots to offer.

This is the Small Magellanic Cloud, a satellite galaxy to the Milky Way and a companion to the Large Magellanic Cloud — each is named for Ferdinand Magellan who noted them on his pioneering circumnavigation voyage of the world in the 16th century. The Small Cloud doesn’t contain the number and complexity of nebulas and clusters as does its larger brother, but it does have some lovely offerings, like the complex of cyan-coloured nebulas and related clusters at top.

However, the notable sights in this area of sky aren’t actually part of the SMC. The two globular clusters in the field lie much closer to us. NGC 362 is a nice globular at top, but it pales in comparison (every such object does) next to the amazing object known as 47 Tucanae, or NGC 104, the huge globular cluster at right. It is a wonderful sight in any telescope.

This is a stack of five 7-minute exposures with the Borg 77mm f/4 astrograph and Canon 5D MkII at ISO 800. I took this on my astrophoto trip to Australia in December 2010, a season when this object is ideally placed for viewing. Most times of the year, the SMC is dragging close to the horizon and lost in the murk, as least for shooting. That’s another reason the poor old SMC gets no respect! 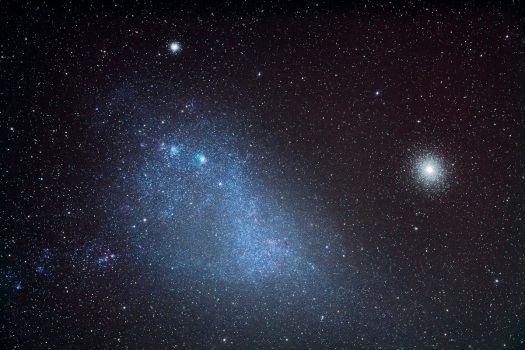