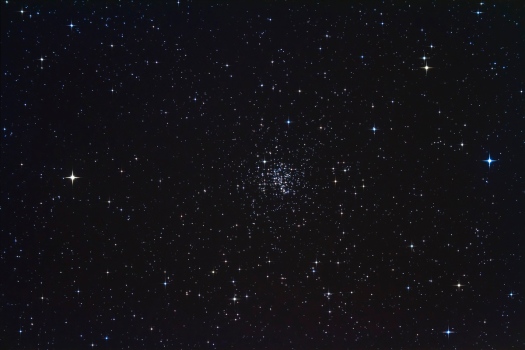 Poor old M67. Does anyone ever look at this cluster? I tend to ignore it, in favour of its brighter and bigger brother, the Beehive Cluster just to the north. Yet, this smaller cluster ranks with the best of the sky’s open star clusters for richness and brilliance. Only a few showpiece star clusters, like the Beehive and the Pleiades, beat M67.

Located in Cancer, M67 really deserves more respect – even a name! – as it stands out as one of the few prominent deep-sky objects in the otherwise sparse spring sky, at least sparse for bright targets for binoculars or a small telescope. Yes, if you love galaxies, the spring sky is heaven! There are thousands of galaxies to hunt down in spring, but most need a decent-sized telescope to do them justice. By contrast, M67 looks just fine in a small telescope. With a few hundred stars packed into an area the apparent size of the Full Moon this is one rich cluster.

M67 is called that because it is #67 in Charles Messier’s catalog of “things not to be confused as comets.” Messier came across this object in April 1780. Messier ‘s object #67 is one of the few open star clusters not embedded in the Milky Way. Like the Beehive, M67 sits well above the disk of our Galaxy’s spiral arms. We look up out of the plane of the Galaxy to view M67, sitting some 2600 light years away, over four times farther away than its neighbour in Cancer, the Beehive. Thus, M67 looks smaller than the Beehive because it is more distant.

M67 holds the distinction of being one of the oldest star clusters known. It’s been around for over 4 billion years. Its position well above the frenzied traffic jam of our Galaxy’s spiral arms helps M67 stay intact and together, an isolated island of stars in our spring sky.

This image was taken right after the M44 Beehive Cluster shot featured in my previous blog post, using the same gear. So the image scale is the same. You can see how much smaller M67 appears than M44. Because M67 was beginning to sink into the west when I took this, I bumped the camera up to ISO 1600 and used shorter 3 minute exposures and stacked five of them to smooth out noise. The telescope was the little 92mm TMB apo riding on the Astro-Physics 600E mount and flawlessly autoguided with the Santa Barbara Instruments SG-4 autoguider. I really love the SG-4 — just press one button and it’s guiding. True “Push Here Dummy” guiding!